Tennessee Whiskey And The Question Of Calling It A Bourbon

A few weeks back I posted a piece on a proposed rule change by the Tax and Trade Bureau on the term “barrel” with regards to spirits aging. In perusing these proposals, I stumbled across another little ditty dealing with Tennessee whiskey that I wanted to take a look at.

Tennessee whiskey is a style of whiskey that, like most whiskey styles in the U.S., has to follow some strict rules in order to use its moniker, though in this case they are only at the state level and not the federal. Below are the official rules outlined by the Tennessee government with a few additional comments by my buddy Rob Pinson, an alcohol attorney based in Nashville.

First, it has to “be manufactured in Tennessee.” Rob points out that no definition of “manufacture” is given, meaning no one understands if it has to be distilled in Tennessee or if it can simply be blended there. 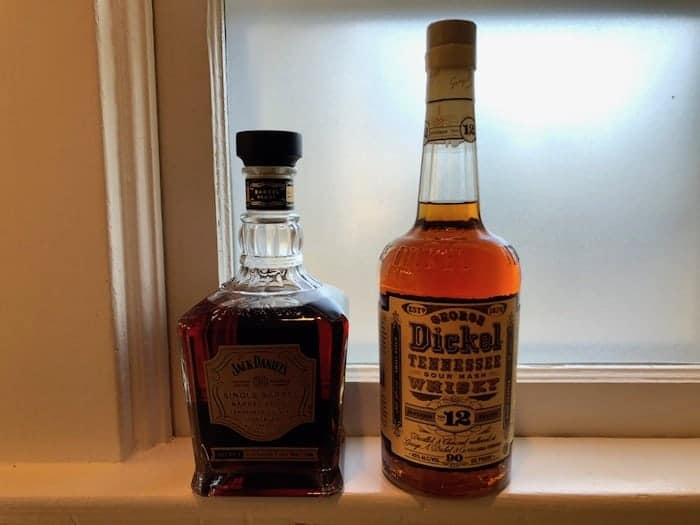 Next, it has to be a mash of at least 51% corn and can’t be distilled to more than 160 proof (80% ABV). Now where have I heard that before…? Prior to aging it has to be “filtered through maple charcoal (with one distillery exception to this),” which is a very loose reference to the Lincoln County Process made famous (in modern marketing at least) by Jack Daniels (in Lynchburg) and George Dickel (in Cascade Hollow) distilleries. Nowhere in the law does it describe exactly how this has to be done.

It also must be “aged in new charred oak barrels in Tennessee.” Rob points out that the government does not list a required time so in theory a single day of aging would meet the requirement. Finally, it has to go into the barrel at no more than 125 proof (62.5% ABV) and be bottled at not less than 80 proof (40% ABV).

Looking at this it becomes clear that Tennessee whiskey is a lot like bourbon as it is defined by federal TTB regulations. In fact, it does everything a whiskey needs to do in order to be called bourbon. And no, the Lincoln County Process does not disqualify a whiskey from being called bourbon. Let’s squash that myth once and for all.

You might even go so far as to say that Tennessee whiskey is Tennessee bourbon, albeit one that does some charcoal filtering prior to aging along with a few other rules that are oddly open to some pretty wide interpretations. Now, why is this all so important?

This new TTB proposal is set up to allow folks making “Tennessee Whiskey” to be exempt from having to label it as bourbon. Here’s exactly how it is being proposed in the suggested new guidelines:

Proposed § 5.143 sets forth the standards for whiskies. TTB proposes to clarify that the word whisky may be spelled “whisky” or “whiskey.” TTB also proposes to require that, where a whisky meets the standard for one of the types of whiskies, it must be designated with that type name, except that Tennessee Whisky may be labeled as Tennessee Whisky even if it meets the standards for one of the type designations. Currently, TTB allows the term “Tennessee Whisky” to appear on labels, even if the product meets a more specific standard of identity, such as for bourbon whisky.

At first glance this doesn’t sound too exciting because the Tennessee whiskey distilleries have essentially always been allowed to do this. But here’s the thing: no where else in the regulations are distillers allowed to do this. If I make a bourbon and age it for two years, I have to label it a straight bourbon. I cannot simply call it a “bourbon.”

In other words, you have to label the whiskey exactly as the style it’s made. It’s honestly something that hasn’t bothered too many folks because if you go through all the hassle of making a style of whiskey according to all the rules and regulations set forth, why wouldn’t you want to put the name of the style on the label?

Well Tennessee whiskey distillers are one such bunch. Growing up there I can tell you we’ve never been too keen on all them Kentucky boys puttin’ on airs about their bourbon. We prefer to think of our sippin’ whiskey as something different.

The general feeling is that the Lincoln County Process makes the Tennessee whiskey different enough from bourbon that it shouldn’t be called bourbon. And maybe that’s for the best. I like bourbon. I like Tennessee whiskey (though truth be told I’ve always been a bit more partial to a swallow from the Hollow than a dram from Daniels).

The sugar maple charcoal filtering, mellowing, bathing, or whatever you want to call it, creates a lighter dram due to some heavier congeners that are removed during the process. Some may read that as “bland,” which is fair. There are some Tennessee whiskeys which make beige seem like the life of the party, but a lot of the mid to top shelf offerings are lovely whiskeys worthy of your time and money.

The TTB making it official that Tennessee whiskey doesn’t have to call itself bourbon is perfectly fine. In fact, the way I see it, we’re just a few steps a way from seeing this whiskey category being protected at the federal level much like other geographically oriented spirits. At that point we can say everyone knows Jack. (Though honestly most of the world already does.)