Tasting Our Way Through WhiskeyTown USA

Editor’s Note: WhiskeyTown USA, a growing Portland, Oregon-based whiskey festival, was an event in which The Whiskey Wash contributed content to the event guide. We also had several writers on site during its two day schedule earlier this month. Here are a few reports filed by them on what was observed. 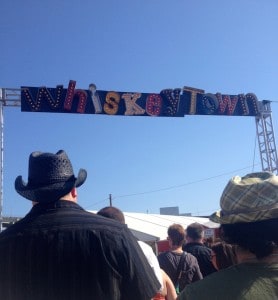 Earlier this month we attended the third annual WhiskeyTown USA, Portland’s weekend-long celebration of whisk(e)y and all things related to it, from cocktails, snacks, and live music to handmade leather goods, cigars, straight razor shaves, and a mechanical bull.

The main attraction, of course, was the whisk(e)y. With dozens of brands pouring hundreds of expressions, to taste everything would have been to court disaster. Instead, we tried to spread our tasting tokens out across geographies: a bit of Irish whiskey here, a dram of Scotch whisky there, and a smattering of Oregon craft whiskeys (given the iconic view of the 405 bridge to the south, it only seemed right).

A raucous festival isn’t the most conducive atmosphere for contemplative tastings, but the two of us managed to jot down a few thoughts about some of the spirits we tried. Here are a few of our thoughts:

This Irish distillery claims to offer the only peated whiskey from the Emerald Isle. We tasted several spirits, including a new blended brand called 2 Gingers as well as their peated expression, Connemara. 2 Gingers is sweet, ethereal, and marshmallow fluff-y, the kind of whiskey you wouldn’t feel bad drinking from a jam jar scrounged from your work break room while on a time-wasting conference call. Connemara, on the other hand, is initially reminiscent of peated Scotch whisky but unfolds with that characteristic lightness on the palate followed by a soft, smooth, charcoal-y finish.

Proud of their in-house malting program and estate grain farm, Rogue is definitely aiming for grand whiskeys but their current products struck us as being very young and hot on the palate. We tasted a barrel-aged Manhattan, which was initially somewhat interesting but which overpowered the whiskey it was meant to showcase. We also sampled several expressions with interesting mash bills but not a lot of substance (yet). Maybe once they spend some more time in the barrel these whiskeys will make more sense in the glass. 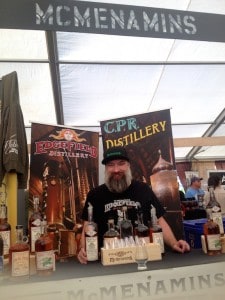 After reviewing McMenamins’ Billy earlier this year we tasted it again at WhiskeyTown, where it still proved great. The honey-sweetened, high-proof, hopped expression called Monkey Puzzle, however, came off as a blue-cheesy, astringent tannin bomb. McMenamins, although typically a maker of lovely drams, appears to be caught up in the Oregon hop craze.

This year, WhiskeyTown relocated from its previous digs near Tanner Springs Park to a more spacious spot on the edge of Slabtown. Although the weather and new location combined for a hot and dusty experience, Whiskeytown was still a great party (and for a good cause – portions of profits go to three different charitable organizations). Maybe we’ll see you there next year! 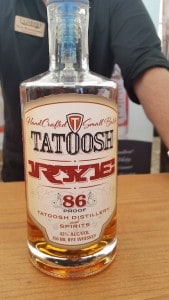 I found the Tatoosh booth at Whiskey Town, USA; here in Portland Oregon recently.  I had almost forgotten about this distillery, with the fun to say name, which a friend had told me about.

This is a Seattle based distillery and sprits company that makes whiskey, bourbon and rye.  The story as told to me by Nick Benzschawel- Brand Ambassador, as I remember it, was a Louisiana family made moonshine before prohibition.   After a run in with the law in Louisiana, during prohibition, the great-great grandfather of the family left Louisiana and ended up in Seattle.   The recipe was passed down over the generations.  This is a 100 year old family recipe that was almost lost, but then the family decided to resurrect it again, legally this time.

Nick also informed me that this was a “walking whiskey”.  Now I have been around whiskey for some time and this was the first instance that I had found of a “walking whiskey” being mentioned.  I have done some Volksmarch, and while in Germany it isn’t unusual to have a beer, I would much rather have a few drams of Tatoosh instead.

I decided to conduct a review one of their whiskies, an 86 proof rye that’s made of 70% rye and 30% corn and aged in American oak.  The corn adds sweetness and mellows it out nicely.

I have to admit, I love this rye, and rate it a healthy 88 points. Now given the price point of only $39.95, I can see it easily being rated at 92, with that in consideration.  I would love to see what they could do with letting this age a bit longer, say 10 years?