People can drink what they want. You should drink what you like and be proud of it, which means be honest about it. Don’t say you are a whiskey drinker if what you are drinking is not whiskey but merely a beverage “made with whiskey.” (See label, below.) 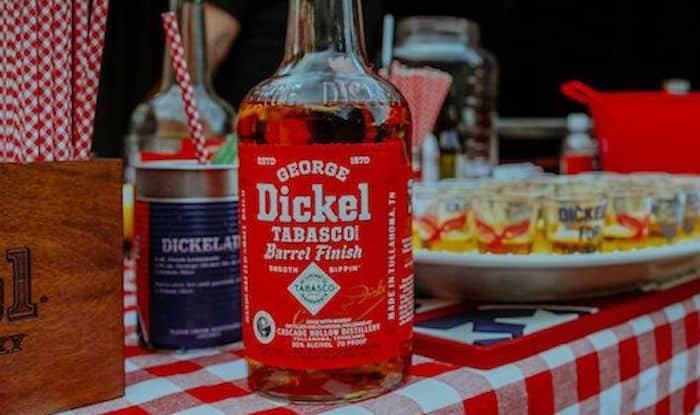 You will also notice, on that label, that the word ‘Tabasco’ appears in larger type and twice as often as the word ‘whisky.’

There are several things going on here, about branding and American whiskey having a moment right now. All of a sudden, everybody wants to say they’re a whiskey drinker. Just about all of the big producers are getting in on it. Jack Daniel’s Honey is not whiskey. Red Stag by Jim Beam is not whiskey. Fireball is not whiskey.

We could talk about the labeling rules, but what’s the point? Most of these products follow the rules, more or less. This isn’t about rules, this is about common sense, or maybe dignity, or patriotism, honor, faith, courage, respect, something important like that.

We may not all have the same truth, but let’s all try to speak the same language.

Wood finishes, like Angels Envy, Maker’s 46, or Woodford Reserve Double Oaked, are a different subject. Wood is an ingredient in whiskey, not the other way around. You can mess with the wood and the liquid is still whiskey. If the Dickel product was just Tennessee whiskey finished in Tabasco barrels it might not be good, but it would be whiskey.

But if you add port, or sherry, or honey, or honey liqueur, or ‘essence of Tabasco,’ the beverage is no longer whiskey. A beverage is not ‘cinnamon whiskey’ unless it is distilled from the fermented bark of a cinnamon tree. It is, exactly like a manhattan, a drink in which whiskey is an ingredient.

Well, not exactly like a manhattan. A manhattan is good.

Editor’s Note: This column comes to us courtesy of its original author.