Denver, Colorado based Stranahan’s Colorado Whiskey is considered a pioneer in the American single malt whiskey segment of the American whiskey market. Established back in 2004, the brand today is known for, among other expressions, its original bottling, a sherry cask variant and its yearly, limited edition Snowflake. Joining these now is the distillery’s oldest release to date.

The new Stranahan’s Mountain Angel 10 Year Old, according to those behind it, is produced from 100% Rocky Mountain barley and Colorado spring water, made in small batches before aging for 10 years in new American oak barrels with a #3 char. It is said to be one of the first American single malts this old to be aged entirely in new American oak, done so because “global single malts are traditionally aged in ex-Bourbon barrels to allow for extended aging; however, the flavor profile of these single malts are influenced during maturation by the former Bourbon that filed the casks and is saturated in the oak. 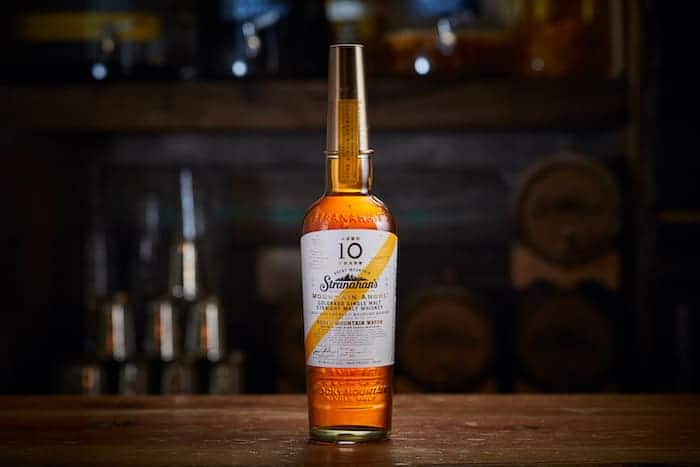 “By using new American oak barrels, Stranahan’s is able to balance the flavors of Mountain Angel 10 Year Old’s malt distillate and oak barrels, without outside influences.”

Given the high altitude of Denver and dry climate, the brand noted of this new whiskey that it “saw a unique angel’s share loss, with several of the 10-year barrels experiencing a loss of up to 80%. This extreme amount of evaporation imparted the remaining whiskey with a heavily concentrated oak flavor profile and silky mouthfeel.”

“Stranahan’s has produced single malt whiskeys for almost 20 years, allowing us to hold back casks for extended maturation to see how they evolve, but aging whiskey in Denver comes with certain challenges,” said Owen Martin, Head Distiller at Stranahan’s, in a prepared statement. “Water evaporates from our casks more quickly in the mountains than at sea level, which leaves limited supply and little margin for error.

“After a decade of maturation, the Mountain Angel 10 Year Old casks saw an average angel’s share loss on par with a Scotch over twice its age, resulting in a liquid with a stunning concentration of flavor.”

Plans call for Mountain Angel to be available in very limited quantities with less than 500 bottles hitting the market this year at select fine retailers in Colorado, California and New York. It is bottled at 47.3% ABV and prices around $130 per 750 ml bottle. You’ll find some official tasting notes below from the distillery.