Switchgrass Spirits, a young distillery on the northside of St. Louis, Missouri, wanted to come up with a way to support the local service industry there that’s been hard hit by layoffs related to the coronavirus pandemic. To this end its distilling team has joined forces with a number of local breweries to craft a charity American single malt whiskey one can pre-purchase.

What’s being called the Common Bond Single Malt, according to those behind it, is a project that uses a brewer’s malt, not usually associated with distilling, as the base ingredient to design a limited edition whiskey from. This new single malt spirit will be aged for one year in Missouri oak barrels before being released to the pubic. 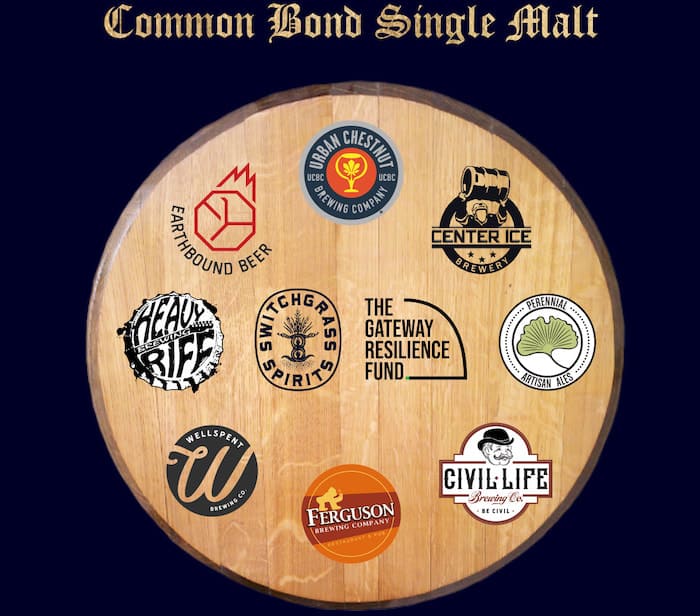 The pre-sale of each $45 bottle of Common Bond Single Malt donates fifteen dollars directly to the Gateway Resilience Fund, which distributes checks to service industry workers who have missed over a month of regular income due to COVID19. The purchases, which are being made through participating breweries, will “also provide immediate cash to breweries to cover operating expenses during this difficult time.”

“Distilling whiskey teaches patience, but we knew we needed to move with speed on this project,” said Nick Colombo, one of the founding members of Switchgrass Spirits, in a prepared statement.

“You don’t have to be a millionaire to make a difference,” added Sarah Miller of Switchgrass. “We know it is easy to feel overwhelmed and powerless during this time.  We created Common Bond as a way for Saint Louis residents to feel good and get involved in directly helping their own community with a hopeful eye towards the future.”

Those breweries in collaboration with the distillery include Urban Chestnut, Civil Life, Earthbound, Heavy Riff, Center Ice, Wellspent Brewing Co., Ferguson Brewing, and Perennial Artisan Ales.  Making a purchase through them will secure the buyer a commemorative “Common Bond” certificate they get in the in the mail that’s reminiscent of a World War II war bond.

In one year customers can redeem their certificate for a special edition bottle of hand-crafted Missouri made whiskey just in time for Father’s Day 2021.