Open the doors to any whisk(e)y-imbibed third place, and it’s highly likely that bottles adorned with the phrase “sour mash” will be amongst the curated collection.  It’s true that this phrase is commonplace throughout the industry; however, there appears to be a scarcity of clarity behind its definition and application.  As the name suggests, sour mash merely means, souring or acidifying the mash (i.e. a decrease in pH).  Seems straightforward, however Dr. James Crow, the original technical expert on this subject, may not have agreed with such a simple definition.

Moreover, in modern-day whisk(e)y, there appears to be many roads leading us to some form of “Sour Mash,” each utilizing a slightly different technique and possibly leading to a different ending result – the whisk(e)y itself.  Back-slopping, backset utilization, direct inoculation of lactic acid bacteria (LAB), or utilization of a cool-ship are all possible methods. 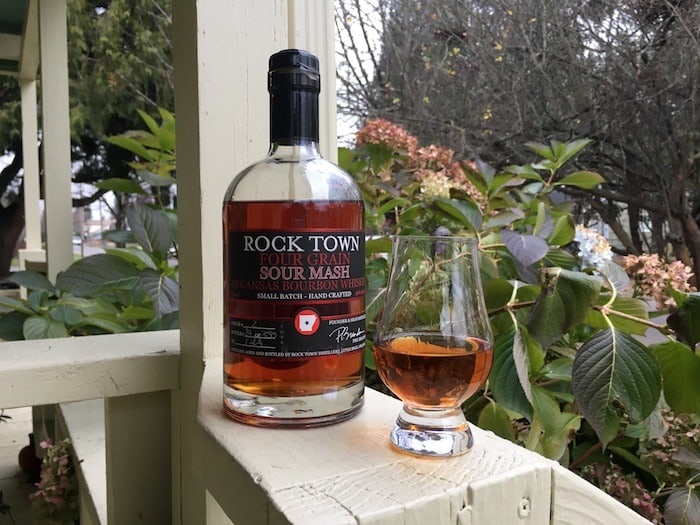 Most significantly, sour mashing creates ideal conditions for the yeast at the start of fermentation and aids in the creation of flavor.  In addition to reducing the pH to more optimal conditions, a typical sour mash process provides valuable nutrients, adding to the success of fermentation.  Aside from the desired yeast strain, there can be a fair amount of other microbiota present in lower concentrations in the fermentation process, including wild yeast, acetic acid bacteria, and LABs.  These organisms consume valuable yeast nutrients, which can result in diminished alcohol (ethanol) yield.  For example, the LABs consume fermentable sugars to mainly produce lactic acid (aroma associated with yogurt), alongside acetic acid (vinegar), and other compounds.

While these compounds can create unique and attractive flavor attributes, over-acidification can also negatively impact yeast performance and flavor.  Therefore, it’s critical that yeast dominate at the start of fermentation and bacterial souring is delayed, controlling overall acidity for optimal ethanol yield and flavor development.

Throughout fermentation, a multitude of compounds are created by the yeast and bacteria, and one critical group of compounds are called organic, or carboxylic, acids.  Organic acids (i.e. acetic and lactic) are important to flavor because they react with the ethanol, and other alcohols, produced during fermentation to generate a class of compounds called esters.  This reaction in the scientific community is known as esterification.  In whisk(e)y, esters often contribute a bouquet of fruity and floral notes.  As the organic acids are the requisite precursors for esterification, sour mashing plays a critical role in flavor development.

One of the most prevalent esters in whisk(e)y is ethyl acetate (fruity or pear-like), originating from acetic acid and ethanol.  However, the temperance of organic acidity is critical, and can be the difference between a nice bright fruit cocktail aroma and a sharp pungency of magic marker.  Outside of esterification, sour mashing and LABs also can provide sweet, green/grassy, spicy, and meaty notes, further adding to the complexity of a whisk(e)y.  Having explained the impacts of sour mashing, let’s explore how it’s done, starting first with the process that is likely to be most analogous to that of the late Crow: back-slopping.

While not the sexiest term, back-slopping is the process of adding a portion of beer or fermented mash collected from a previous fermentation to a new fermentation.  This inoculates the mash with bacteria and yeast to begin alcoholic fermentation and encourage souring along with organic acids for ester formation. 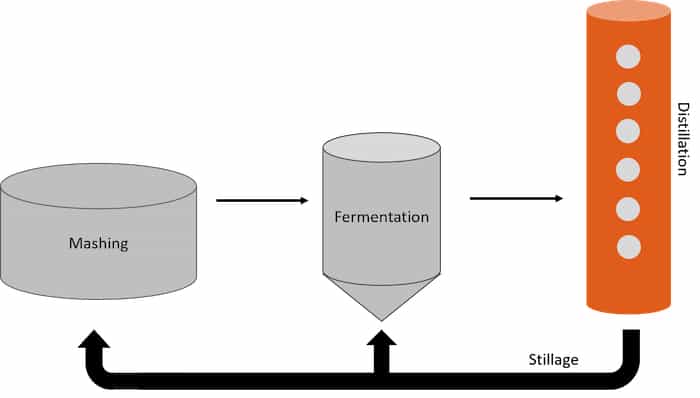 Backset utilization is very similar to back-slopping, except it recycles stillage into a mash from a previous fermentation instead of beer.  Stillage is the residual liquid and material recovered after distillation, which contains a high concentration of organic acids. Unlike back-slop, stillage contains no live yeast or bacteria, which allows for better fermentation and flavor-development control; however, precautions must be taken when handling and storing backset to minimize contamination. Typically, it is used right away or stored at high temperatures.  When added during mashing, backset helps to adjust the pH for optimal conversion of starch from the milled grains to fermentable sugars. 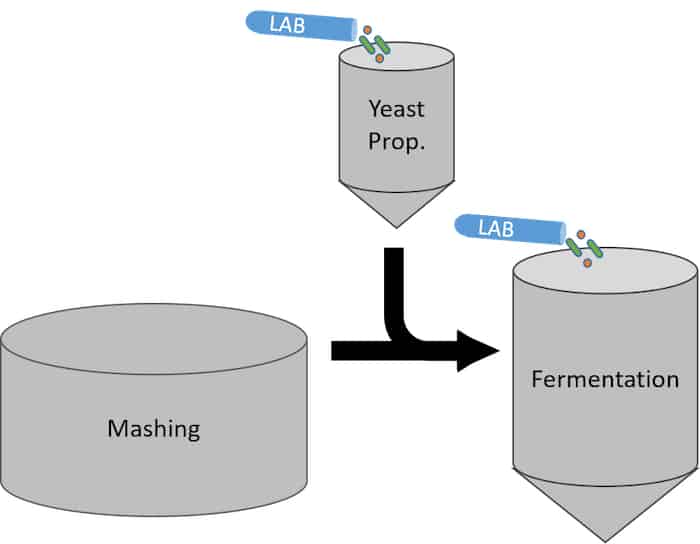 Direct inoculation of LAB is the most controlled method of sour mashing.  This practice entails making a mixture of specific bacteria and dosing a measured quantity into the yeast propagation or at the start of fermentation alongside the yeast. While the latter technique doesn’t acidify the mash directly, it will contribute to the overall acidity of the fermentation, effectively creating the same result.  Commonly, backset is used in conjunction with direct inoculation which gives the souring effect from the backset and precise bacterial inoculation for optimized quality, flavor, and process control.

Opposing the control of the direct LAB method, cool-ship usage allows for spontaneous inoculation of the mash from the bacteria and yeast in the air.  Mash is transferred to a separate vessel so native microorganisms from in and around a distillery can inoculate the mash and acidify organically.  After this has begun, a portion of this mash is used to inoculate subsequent fermentations, often with the addition of a cultured yeast strain. 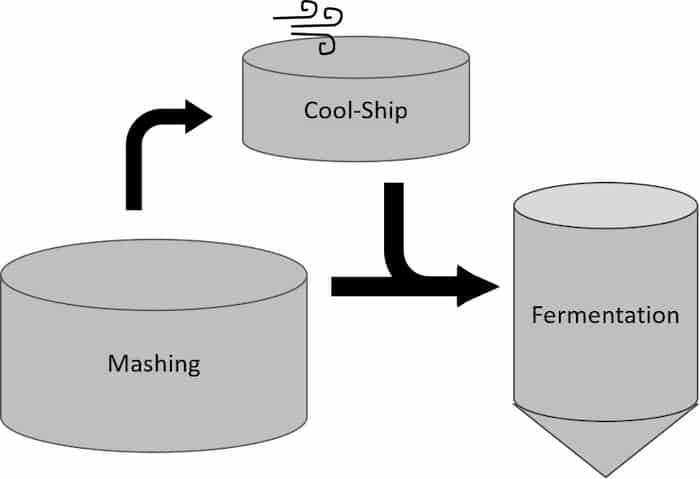 What does it all mean?!

Between back-slopping, backset, LAB direct inoculation, and the cool-ship method, there are many options, but which is the true “sour mash?”  While the late Dr. Crow might disagree, all these practices do justice to the moniker.  Each technique has subtle nuances, adding to the art and science of the whisk(e)y-making process and if you ask me, all have the potential to make some seriously fine whisk(e)y.