Understanding the Riddle of Sorghum Whiskey

Editor’s Note: This article is in part a report by multiple writers from our site. Primary article credit goes to Savannah Weinstock, including in the reviews portion. Editing and co-management of the non-review portion is by managing editor Margarett Waterbury. Article consulting was also courtesy of Chuck Cowdery.

You’ve probably seen it by now: sorghum whiskey. After exploring alternative grains like triticale, rice, heirloom corn, and even millet, craft distillers are turning their attention to the newest ancient grain on the block: sorghum, a gluten-free grain with a link to the American South, to boot.

People have been growing, eating, and fermenting sorghum for thousands of years. A staple grain in parts of Africa and Asia, it’s also grown worldwide as a nutritious fodder for poultry and cattle. In Africa, it’s made into beer, and in China, it can be used to make baijiu. But, unlike other alternative grains, there’s a controversy over whether sorghum whiskey should even be called whiskey at all. To understand why, you need to know a little bit about what makes sorghum so special.

Unlike, say, wheat, sorghum offers two very different options for human consumption: the grains, which are harvested, dried, and consumed in whole grain or flour form (much like other cereal grains); and a sweet syrup that’s made from the juice obtained from crushed sorghum stalks, using a process [PDF] similar to the production of sugar cane molasses.

According to National Sorghum Producers, the trade organization behind the little “Sorghum: The Smart Choice” logo on some sorghum spirits, sorghum traveled from Africa to India, China, and Australia, making its way into the U.S. sometime in the 1700s. While sorghum whiskey feels new to most Americans, sorghum is regularly used in alcohol production in other global traditions.

In the United States, sorghum is particularly popular in the South, where celebrity chefs like Sean Brock and Linton Hopkins champion sorghum as an integral part of Southern cooking (Brock says he ate it “every day” growing up.) 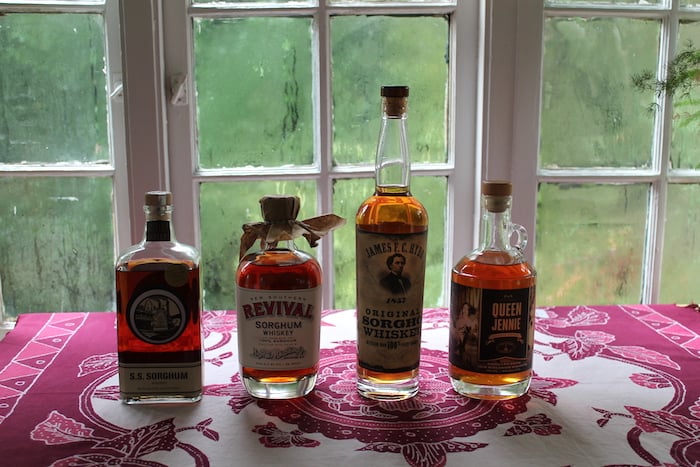 What’s the deal with sorghum whiskey?

Sorghum whiskey is becoming more common, perhaps due to the fact that sorghum is naturally gluten-free. But most American sorghum producers use a unique strategy to produce their sorghum whiskey: instead of using the grain to make a mash that’s then fermented and distilled, they use sweet sorghum syrup, which is made from the juice in sorghum’s stalks.  Can you still call that whiskey?

Although most American sorghum whiskeys are made from fermented syrup rather than fermented mash, you can’t call them rum, which is clearly defined as being made from “the fermented juice of sugar cane, sugar cane syrup, sugar cane molasses, or other sugar cane byproducts.” All that leaves is the catch-all category of “specialty spirit,” defined tantalizingly as “distilled spirits not defined under any other class.” And they say bureaucracy squashes creativity…

In any case, this may be a manufactured controversy. Several sorghum spirits producers have received approval to use the word “whiskey” on their labels, which seems to indicate that the TTB doesn’t see an issue.

For now, we’ll all just have to live with the uncertainty. But let’s get on to the important bit – how does this stuff taste?

I’m here to taste four so-called “sorghum whiskeys” against each other in the ultimate sorghum-off. As is customary in these capsule reviews, I will be going from from worst to best on a scale of 1 to 5, with 1 being undrinkable even in dire circumstances, and 5 being a perfectly respectable whiskey to share with friends without shame.

S.S. Sorghum Whiskey of Still 630 in St. Louis distills with 100% sweet sorghum syrup made from a custom blend of sorghum varieties. It sits at 45% ABV and it is non-age statement. The bottle sports a variety of stickers, and looks strange overall.

S.S. appears warm amber in the glass, highlighted by a yellowish tinge. Overwhelming butter on the nose to start. Sweet cream butter whipped into buttercream frosting and warm yellow cake batter. Even after sitting for some time, ethanol remains present; this dram may be 45% but what proof it does have shouts from the glass. This spirit smells neither like a rum nor a whiskey. Or rather, it smells something like a bourbon sans baking spices and heavy oak sugar influence.

The palate is buttery and gummy, with bourbon flavor potential. Gomme syrup, honey on toast, and malted milk balls play into S.S.’ sweetness. Oak char clearly gives the spirit much of its flavor, with the body quickly falling away.
The finish, like the body, is quite flat—with some lingering black pepper.

Scott Blackwell of High Wire Distilling believes that their use of the entire sorghum plant in distilling is what qualifies it as a whiskey. They source syrup from local producers named Muddy Pond who create it by pressing the grain, plant, and leaf together to produce a liquid that is then fermented and distilled. So, in theory, some of the grains make their way into the mash alongside the juice from the stalks.

High Wire Distilling Co. is located in Charleston, South Carolina, and sources their pressed sorghum grain/leaf/plant syrup from nearby eastern Tennessee. The batch I tasted was #7, bottle #617, Non-Age Statement, and 44% ABV.

The bottle is actually quite cute; squarish in shape, New Southern Revival comes with its top wrapped in brown paper and tied with baker’s twine. The spirit is a gorgeous golden burnt caramel color in the glass. Candied on the nose, Revival breathes new life into the vapid “pumpkin spice” category. Toffee, butter pecan sandie cookies, and pumpkin left my mouth watering. If I were the Starbucks sort, I would be running out the door as we speak.

The pumpkin bread of the nose makes a stark transition into the thin, hot, astringent palate. Light bodied, Revival is both sweet and astringent on the palate. The finish hints faintly of the pecan sandie of the nose. Short and astringent as well, the finish doesn’t leave much to linger on.

The jump from decadent pumpkin to hot oat leaves something of a hole in my heart. I applaud High Wire for its commitment to Southern tradition, but wish its juice had more body to back its spice.

Queen Jennie of Madison, Wisconsin’s, Old Sugar distillery is produced with 100% Wisconsin sorghum syrup and aged in Minnesota oak barrels. It clocks in at a mild 40% ABV, again NAS.

Queen Jennie comes in a cute lil’ handled jug that I just can’t but adore, however janky the label. Light sunflower yellow in the glass, the spirit appears somewhat cloudy.

Maybe white dog on the nose to start—no, rhum agricole. Smells much more like a rum than a whiskey. Burnt sugar, salty molasses, smashed fig, and celery salt create a gorgeous bouquet of eccentric scents. After opening, orange oil, unbaked gingerbread, and band-aid tag a long.

For maybe the first time in my drinking career, the low proof on a spirit has been a boon rather than a letdown; Queen Jennie’s 80 proof makes for an easygoing sipping experience. Cloves, mace, and ginger-y heat marry with a certain bagel chippiness that I can’t help but be delighted by. Soft, fresh ginger notes linger briefly, easing the palate away from the spirit.

While Queen Jennie is by no means a whiskey, it makes for a dang good rum. Light, spiced, and complex, Jennie would make a delicious spirit-forward rum cocktail. The spirit, somehow, is my new favorite sipping rum!

James F.C. Hyde whiskey is distilled from sweet sorghum syrup by Jersey Artisan Distilling out of New Jersey. It is non-age statement, 43% ABV and classified by the TTB as “whisky.”

Quite light in the glass, James F.C. Hyde appears a ghostly lemon yellow. The spirits smacks of candy corn pumpkins at first, moving towards a waxy, buttery scent. The nose, like the color, is quite light. Dry biscuit, and a somewhat chemical—maybe cleaning product?—scent comes through.

Wispy meringue, almond, and waxed paper define the palate. Extremely light and odd. Drinking Hyde makes me feel like Gregory the Goat from children’s book Gregory the Terrible Eater, in which Gregory refuses to eat garbage like a normal goat and instead craves human foods like omelets and oranges; in the end, Gregory and his parents meet in the middle to combine both goat food and people food. If Gregory & co. were to share a dram, Hyde would surely be it. Ghostly on the finish (as on the nose), Hyde combines rock candy and butternut squash for a curious, and quite short, finish.

Hyde doesn’t taste much like a whiskey, but did capture my attention. A truly odd dram. Although I wouldn’t dare pair Hyde with any sort of hearty meal, I would pair it with tea time desserts, from meringues to petit fours to simply whipped cream with preserved lemon. I would not enjoy this spirit past midday.

Through my exploration of sorghum spirits deemed “whiskey,” nothing has brought me more joy than the idea that American foodways and identities remain a driving force in the spirits industry. The craft, innovation, and passion behind these four brands is nothing to be scoffed at. However, after much research and consideration, I have to assert my steadfast belief that none of them are truly whiskey. Their means of production make them closer to rum than whiskey; the use of processed sorghum syrup in fermentation and distillation eliminate them from the whiskey category.

This leaves these wonderful spirits in some sort of legal purgatory between rum and whiskey, with only our palates as guides. And while I don’t think that the TTB is going to alter any whiskey definitions anytime soon, I do think that it is up to us drinkers to eschew labels and bravely travel into spirits purgatory to enjoy what spirits we can, regardless of labeling.