Smoke on the (Fire) Water: Using Wood Smoke In Whiskey

In America, when we think of a whiskey being smokey, we usually envision a peaty single malt, likely from Islay in Scotland. But that’s just the beginning. In the United States, distillers are using all kinds of wood smoked malts and other grains to create an array of flavors much different than peat.

Scotland uses peat because it was a readily available fuel source for the malting process in the early days and they’ve stuck with it. Here in the United States, peat isn’t available in most areas so we use what’s on hand, which tends to be wood. Think about it like this: just like Scotland has different regions known for producing whisky in their own styles, America has its own regional styles – for barbecue. Using various types of wood in barbecue leads to distinct flavor profiles. Hickory tastes different than mesquite, which contrasts greatly from applewood, right? With this in mind, distillers throughout the United States have incorporated wood smoke to create fascinating expressions that can represent specific areas of the country.

Mesquite grows throughout the southwest and the smoke has a unique sweetness when the wood is burned. In Tucson, Hamilton Distillers have developed their own process for malting and smoking barley to create Whiskey Del Bac Dorado Single Malt. Just a few hours away in neighboring New Mexico, Santa Fe Spirits also utilize mesquite for their Colkegan Single Malt. San Antonio’s Ranger Creek produce Rimfire Single Malt with their own process of mesquite smoking malted barley. Mesquite contributes to a much different aroma and flavor to whiskey than peat, swapping out the medicinal bandage notes for barbecue potato chips. 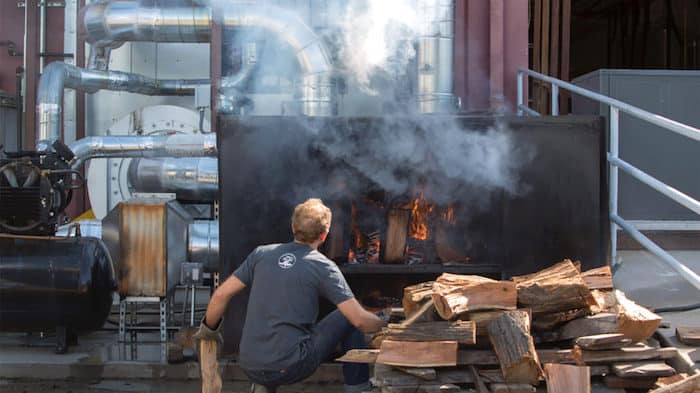 Instead of using barley, Waco’s Balcones Distilling produces Brimstone Whiskey, which smokes blue corn with Texas scrub oak. The taste is much different than the mesquite whiskies, with much more intensity and earthy, tobacco notes. Contrast that with Rock Town Distilling in Arkansas, who produce a wheat whiskey which is cold smoked with hickory wood prior to milling the grain.

Corsair Distilling in Nashville uses several types of woods, including hickory, cherry wood and beechwood to produce a range of whiskies by smoking malted barley in a unique process of their own design at a farm the company owns in Bells Bend, Tennessee. Corsair is no stranger to using alternative methods and grains to produce unique expressions. Darek Bell, co-founder and owner of Corsair, literally wrote the book on using different woods and plants to smoke grains. He also wrote a book on his exploration into alternative grains, but that’s for another article. The point is, he knows more than a thing or two about using wood smoke in whiskey.

Similar to Corsair, Virginia’s Copper Fox Distillery floor malts their own barley while smoking it with apple, peach, and cherry woods for their single malt whiskies. During maturation, Copper Fox also takes toasted apple wood chips and adds it to the casks to further enhance the flavor profile, an approach not usually seen in malt whiskey production.

The success of smaller distilleries to use wood smoked malts in their whiskies has led to bigger distilleries venturing into the style as well. Woodford Reserve in 2017 released their Master’s Collection Cherry Wood Smoked Barley Bourbon. Woodford uses a mash bill that includes thirty percent cherry wood smoked malted barley. This could be proof (no pun intended) of wood smoked whiskey gaining momentum.

Here’s the thing. If you enjoy the taste of smoke in your whiskey, don’t think there’s just peat to create that flavor. If peat isn’t your thing, hell, maybe getting into these types of whiskies might open the door to it someday. You might be surprised. Mix things up and see what you like.

Dave is a writer, whiskey aficionado, musician, and Certified Specialist of Spirits. He currently resides in Seattle by way of Nashville.