When it comes to pairing whiskey with desserts—or, why not, drinking whiskey for dessert—the first thing that comes to mind is bourbon. And with good reason: bourbon’s sweet vanilla, caramel, and dried fruit notes do make it a perfect after-dinner libation. But the world of whiskey is wide and getting wider, and many non-bourbon expressions also rate as sweet treats. Here are a few of our favorites, bourbon and otherwise: 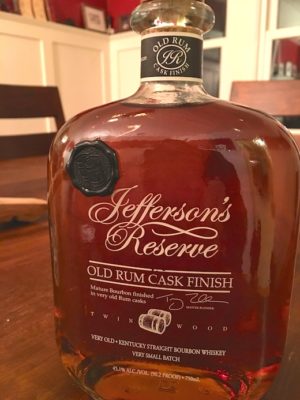 This sourced whiskey from non-distilling producer Jefferson’s Bourbon is an eight-year-old bourbon finished for 15 months in Gosling’s Family Reserve Old Rum barrels. That finish has a defining influence, yielding a spirit akin to “very fine rum” with “the chew of good bourbon,” and notes of caramel, butter, marshmallow, and fondant. Our reviewer called it “a warm, edible blanket perfect for the winter months.”

One of four expressions in the Dalmore’s 2011 series named for Scotland’s “big four” salmon fishing rivers, the Tay Dram makes a delicious dessert Scotch. Vanilla ice cream, sherry, and salted caramel mingle with a big dose of chocolate. Our reviewer called it “an absolute joy.”

Almost 50 years after P&H Egan, a family-owned distillery in Tullamore, shuttered under pressure from bigger competition, Maurice and Jonathan Egan revived their family legacy under the new name Egan’s Irish Whiskey. Their 10-year-old single malt has notes of honey, spice, and toasted hazelnut, balanced out by earthy tobacco. Our reviewer imagines pairing it with a nutty marzipan tart.

One selection from a recent roundup of sorghum whiskeys (or perhaps sorghum “whiskeys,” since they’re distilled not from the grain itself but from a sweet syrup made from the plant’s stalks), this proved to be a rather un-whiskey-like but nonetheless noteworthy spirit. Although our reviewer found it “a truly odd dram,” notes of candy corn, rock candy, almond, and butternut squash make it a match for light desserts like meringue and petit fours.

Although this special release from Woodford Reserve is technically a finished American whiskey, thanks to the two-year brandy barrel finish (not that other distilleries let a finish in used barrels keep them from calling their whiskey bourbon), it hits all the notes you’d want in a dessert-friendly bourbon. Vanilla, milk chocolate, and caramel mingle warmly with raisin and cherry notes from the brandy finish. This would be perfect alongside a spicy fruit dessert like apple-cranberry pie.