Shiner Bock Becomes Base Of A Special Balcones Texas Whiskey

The Spoetzl Brewery was founded in Shiner, Texas in 1909, brewing beer with old-world traditions and recipes for the many German and Czech settlers in Central Texas. Its flagship beer is the Shiner Bock, an American style dark lager brewed with roasted barley malt and German speciality hops. Said beer is also now the base for a new collaborative malt whiskey between the brewery and Balcones Distilling.

The new Balcones Texas Bock whiskey, according to those behind it, “is a malt whisky made from the exact recipe for Shiner Bock beer, utilizing the brewery’s mash bill and proprietary lager yeast strain to create a remarkable flavor profile.” It was aged in first-fill American oak barrels for at least two years and made with a mash bill of over 51 percent malted barley. 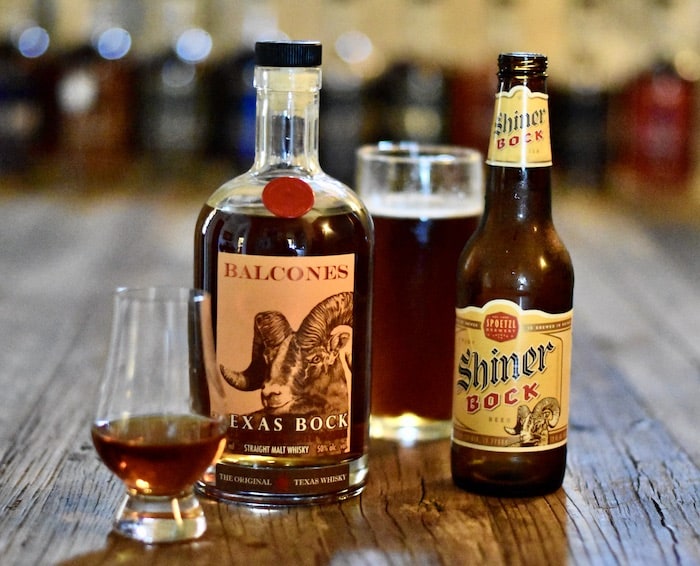 This whiskey is not the first partnership between the two companies. It instead follows on the heels of a Barrel-Aged Bock craft beer released by Shiner in March of this year and the Barrel-Aged Spoetzl Märzen released in 2018.

“We are always excited about exploring the methods and processes that produce unique and complex flavors, so we were thrilled to collaborate with the Spoetzl Brewery team to create this new whisky,” said Jared Himstedt, head distiller at Balcones Distilling, in a prepared statement. “It is always inspiring to partner with folks who are committed to quality, craftsmanship, and flavor.”

“We look forward to having another opportunity to work with the world-class team at Balcones,” added Tom Fiorenzi, director of brewing at Spoetzl Brewery. “This whisky, in addition to our Barrel-Aged Bock, showcases an exceptional partnership between two Texas-made iconic brands, and we are excited for future opportunities to partner.”

Balcones Texas Bock, bottled at 50% ABV, prices for around $40 per 750 ml bottle and is available for sale at the distillery and at retailers throughout Texas and Oklahoma for a limited time. You’ll find some official tasting notes below for your consideration.