Colkegan PX “sits at the top of the pyramid,” said head distiller Kris Bohm in a prepared statement.

This is the oldest Colkegan to be released to date. Bohm and founder Colin Kegan tasted the beverage at various proofs, from 92 to 116, and both decided upon 100. “It really showcases the character and depth,” continued Bohm. “The 100 proof has a heavier body and best maintains the character coming out of the cask.” 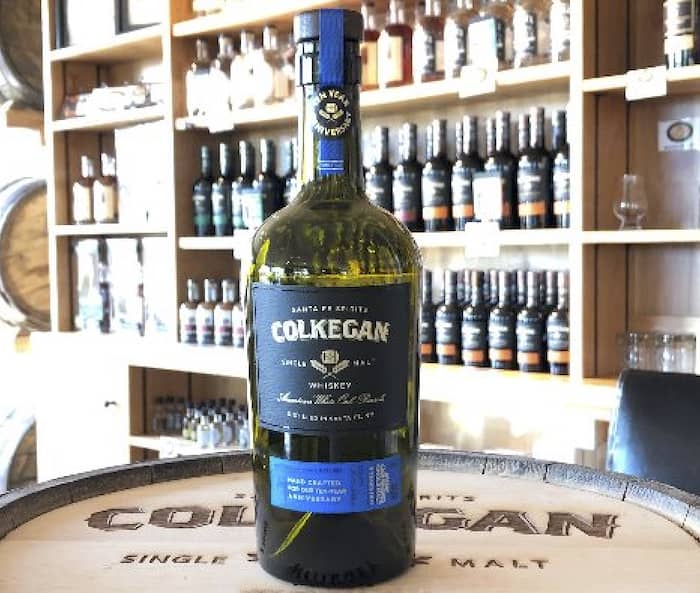 The distillery team chose to age the three-year-old Colkegan for an additional year in Pedro Ximénez (PX) sherry barrels. “We like our whiskey,” noted Kegan. “The Apple Brandy Finished Colkegan was a huge success.  We decided to build on that success by trying a different finishing variation.”

Though an American single malt, Colkegan was created in a style similar to Scotch, and aging Scotch in sherry barrels has been tradition for hundreds of years. To proof down the Colkegan PX, Bohm used the élevage process of gradually adding water to reduce the proof of the whiskey while it is still in the cask.  “This extracts different sugars form the wood.  It helps the whiskey take on more of the character from the cask.”

While Colkegan is known for its smoke, this expression also, according to official tasting notes, includes subtle hints of wood from the sherry butts and sweetness from the Pedro Ximénez. The character has a rich flavor profile with notes of stone fruits and cherries, with a sherry finish that accentuates the fruity notes and gives a multilayered finish. It is said as well that “the extra year of aging tempers the smoke a lot”.

Colkegan PX was launched with a very small release of 100 cases of 750ml bottles. It will be available exclusively in Santa Fe Spirits’ tasting rooms through the end of the year, or while supplies last.

39
Shares
693
Views
Share on FacebookShare on TwitterGet Our Newsletter
Cheers to the Dads! Personalize a bottle of his favorite whiskey to create a modern gift for the modern man. Use code: FATHERSDAY20 for $20 off your next order of $100 or more at ReserveBar