When one looks across the ever increasing world of American single malt whiskeys, a standout in the crowd is easily the Colkegan from New Mexico-based Santa Fe Spirits. This mesquite-smoked malted barley expression gives a decidedly domestic spin on the classic peat smoked style from Scotland, which we were quite impressed with some years ago when we reviewed it. The distillery does some variants on this offering, such as the new 2018 release of an apple brandy cask finished bottling.

Colkegan Apple Brandy Cask Finished Single Malt, according to those behind it, starts as the more typical Colkegan expression that’s been aging “in both new and used 53 gallon oak barrels for a minimum of two years in Santa Fe Spirits’ climate controlled barrel aging rooms.” As co-distillers Steffany Landers and Mike Kelley taste through these barrels, they set some aside as possibilities for the finishing process. It is said these “are usually older barrels (four to five years) in which the flavor profile stands out too prominently to fit in a blend of Colkegan, perhaps oakier or smokier than the rest of the barrels in the blend.” 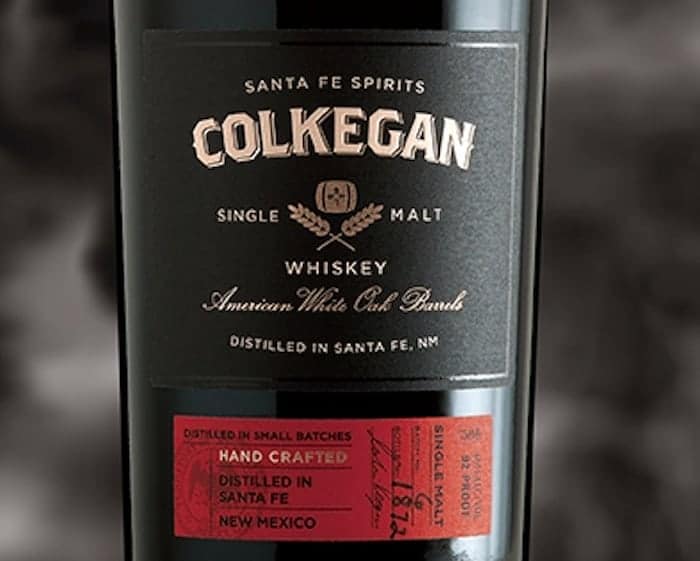 From there, the team then adds the tagged Colkegan to still wet barrels of its apple brandy, after the latter has been dumped from barrel to tank in preparation for bottling. A rather fascinating transition, noted the distillers, occurs here in that they use “25 gallon barrels for [the] Apple Brandy and 53 gallon barrels for Colkegan, [so that] one barrel of Colkegan will go into two separate used Apple Brandy barrels, therefore changing the end flavor of even one barrel of Colkegan after it spends a year aging in its new barrels.”

Colkegan Apple Brandy Cask Finished Single Malt is noted as being a once a year release, happening each fall. It is thus out pretty much now, with a price point looking at around $60 per 750 ml bottle.