Recently, we wrote about Portland-based Time & Oak, a company that claims to have invented a new tool to make whiskey taste better. Afterwards a companion taster and I tested Whiskey Elements on two very different spirits: the Signature element in a bottle of “Hard Eight Unoaked Rye,” an unoaked 100% rye from Portland distillery Stonebarn Brandyworks; and the Smoked Element in a bottle of Evan Williams Black Label. Here’s what we found. 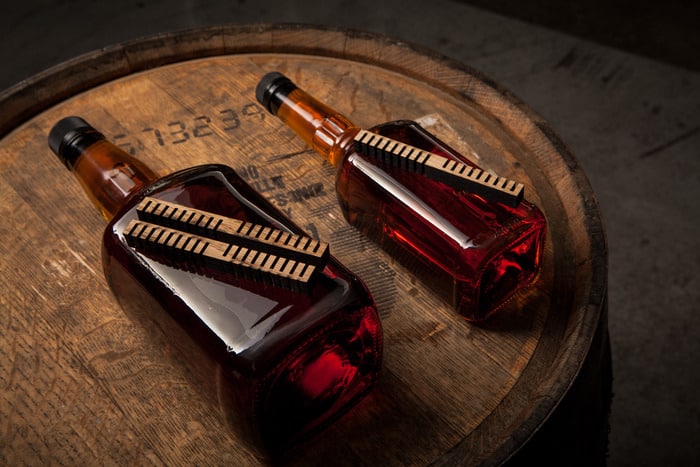 While the packaging claims it takes as little as 24 hours to transform a bottom-shelf whiskey into top-shelf booze, Time and Oak’s co-founder and inventor, Josh Thorne, had told me during our interview that “in moonshine, it takes three to six months; in one-year-old whiskey, it takes just days.”

Why the Elements are apparently so rapidly effective on aged whiskey and so laggardly in changing unaged whiskey is a mystery. We did a blind tasting of the Hard Eight Unoaked Rye, the unoaked rye that had been exposed to the Signature Element, and a two-year-old rye made at Stonebarn Brandyworks from the same mash bill which had been aged for 25 months in 30 gallon new charred American oak barrels. We initially left in the Element in the unoaked for 24 hours and agitated periodically, but after a tasting decided to leave the Element in another 36 hours as little seemed to have changed.

The unoaked and the oaked-with-an-Element products were difficult to tell apart, with the Element bottle acquiring a pale yellow tint after 60 hours. I couldn’t tell the difference at all, but my tasting companion claimed they found the Element-altered product “maybe a little bit smoother.”

After leaving the Element in for a few more days, it released more color into the unaged spirit but never transformed it into anything resembling a truly aged one. The element imparted some tannic oak character but nothing like the harmonic aromas and complexity of a barrel-aged whiskey.

Verdict: Not a magic bullet for lackluster white dog spirits, but I’d be interested to try it in another white spirit like tequila or gin. 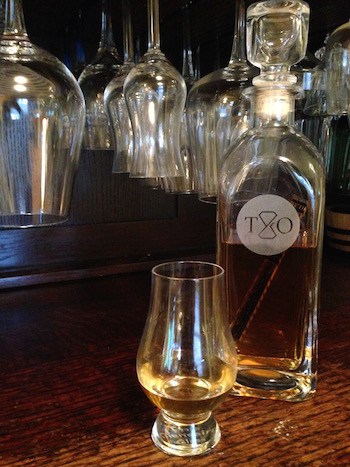 We treated the Evan Williams Black Label with the Smoke element for 36 hours, and then compared it to an untreated bottle of Evan Williams.

Tasting them blind, the Element-treated sample was immediately identifiable so something certainly happened in 36 hours. The aroma is definitely different here: the nose on the non-Element Evan Williams has a lot of texture, with more mineral and ozone-like high notes as well as black cherry and honey. With the Element, it’s more subdued, skewing more towards the bass notes of grain and dark fruit with a clearly distinguishable smoke note.

Untreated Evan Williams is surprisingly clear on the palate. It’s been a long time since I last tasted Evan Williams, and perhaps never with the full-minded intention and focus of constructing real tasting notes. Black pepper, honey, and reddish fruits like plum and Bing cherry segue to an honest, grain-forward finish with a hint of oak astringency.

With the Element, I think a lot of that dimension is lost. The smoke character is pretty unappealing. The level of the smoke is good, but it’s much more like an extinguished campfire than iodine-rich peat smoke. The lightness in the front palate of the untreated whiskey is gone, replaced with a more straightforward and undifferentiated flavor dominated by oak vanillin. My other taster detected more sourness and astringency in the Element-treated spirit than in the Evan Williams, and I too noted a harshness in the finish that wasn’t present in the original spirit.

Verdict: The Smoke Element seems considerably more potent than the Signature, but neither of us enjoyed its contributions to the spirit. While the Time and Oak Elements are an interesting novelty, I don’t think they will be replacing good old-fashioned barrels any time soon.

58
Shares
518
Views
Share on FacebookShare on TwitterGet Our Newsletter
Get The Glenlivet 18 Year Old at ReserveBar. Shop now!