Copperworks Distilling Co., a producer of American single malt whiskeys out of Washington State, recently released a whiskey distilled from barley made with local peat. Just prior to this offering, however, it also announced the release of the Copperworks American Single Malt Release 033, a single cask whiskey matured in a cask previously used to produce fino sherry.

Different from releases in the past where Copperworks added a portion of sherry cask whiskey to contribute to the overall flavor profile, the new release focuses entirely on the flavors of sherry cask matured whiskey – a first for the distillery. 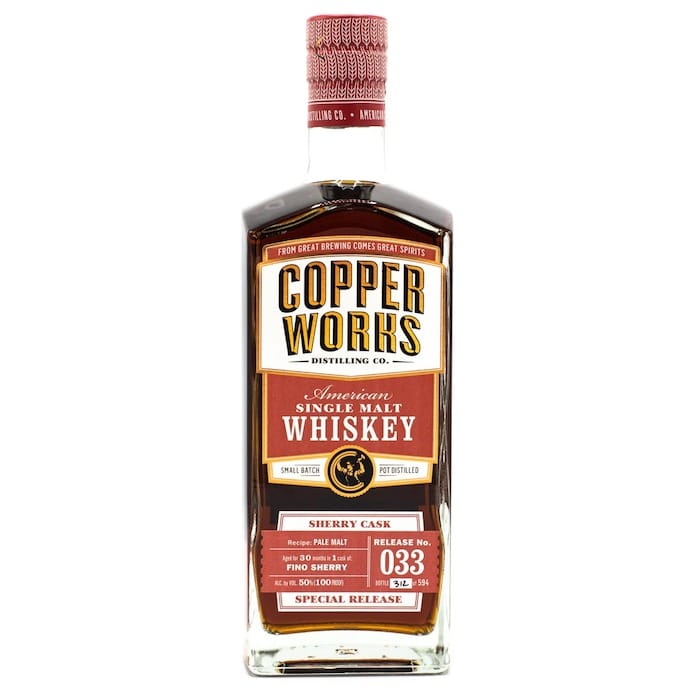 The American Single Malt Release 033 was created by pouring 5 gallons of “new make” whiskey (whiskey that hasn’t yet been aged) into the cask, before adding 85 gallons of its Pale Malt recipe whiskey that had been aged for more than two years in a cognac cask and allowing the mixture to mature for 30 months.

The sherry cask contributes characters of almond, butter, fruit skin and tomato vine to the whiskey, which holds an initial flavor of fig conserves, browned butter and apple skin. Aromas of almond, fruitcake, rum raisins and linseed oil can be found in the drink, as well as a finish of tobacco, citrus rind, balsamic vinegar and tomato vine.

Copperworks procured the sherry cask from Jerez, Spain where it had been used for more than 80 years in the production of fino sherry, the driest and most savory style of sherry produced. The cask can hold 500 liters, which allowed the distillery to produce more than 2 times the amount of a standard American barrel with a limited single-cask release of 594 bottles (750 mL) at 50% ABV.

It is pricing over $75 per 750 ml bottle, with a limited number of bottles still available directly from the distillery.

14
Shares
655
Views
Share on FacebookShare on TwitterGet Our Newsletter
Cheers to the Dads! Personalize a bottle of his favorite whiskey to create a modern gift for the modern man. Use code: FATHERSDAY20 for $20 off your next order of $100 or more at ReserveBar