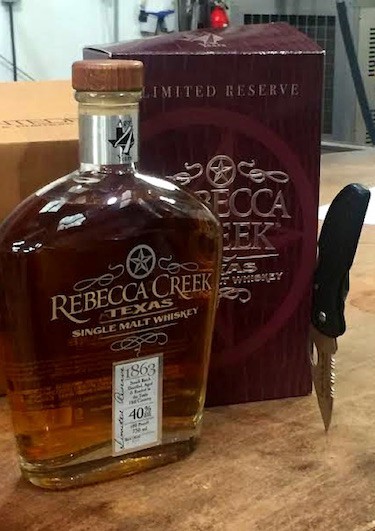 There’s an American single malt whiskey revolution in Texas, there is no doubt. This whiskey style, pioneered in the Lone Star State by well regarded craft distillery Balcones, has also seen the likes of Herman Marshall and Swift Distillery produce their takes on it. Now joining them is Rebecca Creek, which recently announced its own single malt bottling.

Information on the new Rebecca Creek Texas Single Malt Whiskey is a little limited at this point, but from what I’ve been able to pull together from various sources this is a four years in the making release that is pretty limited in scope. It was distilled using your garden variety copper stills, according to Your Sassy Self, and aged in American oak casks, noted the San Antonio Business Journal.

Now, what may be of interest to American single malt fans is the rather unique chocolate malted barley the distillery says it used for the mash bill of this whiskey. It is said to thus have a “nice hint of chocolate at her finish” and to pair “best with a single ice cube or when drank neat.”

Availability of the Rebecca Creek Texas Single Malt Whiskey is pretty much limited to Texas at this point. Should you want to try tracking a bottle of this 80 proof spirit down, you could try Spec’s.