Well-aged whiskey in a week? In a day? That’s the promise of the burgeoning field of rapid-aging whiskey technology, of which there are already a handful of players, including Lost Spirits and their THEA One reactor; Cleveland Whiskey; and Terressentia, with their TerrePURE system.

Is any of this legitimate, or is it all bogus? There are certainly plenty of doubters out there, especially among those in the whiskey industry, as well as whiskey consumers who respect its tradition and history, and the specifics of the production process.

“We don’t get that much anymore,” says Bryan Davis, founder of Lost Spirits and potential mad scientist. He’s talking about those doubters and the naysayers. “We run into people who just sort of question whether or not this is moral,” he says with a laugh.

With Lost Spirits, THEA stands for Targeted Hyper-Esterification Aging, or as Davis puts it, their specific process of hacking the aging system. “We didn’t replicate the traditional aging process, we hacked it,” he says. “There’s a distinct difference here.”

What he means is that they can’t pinpoint the creation of say, a six-year-old bourbon, or an eight-year-old bourbon, they can only get to a final destination based upon chemical composition. In other words, there’s no stopping in between. 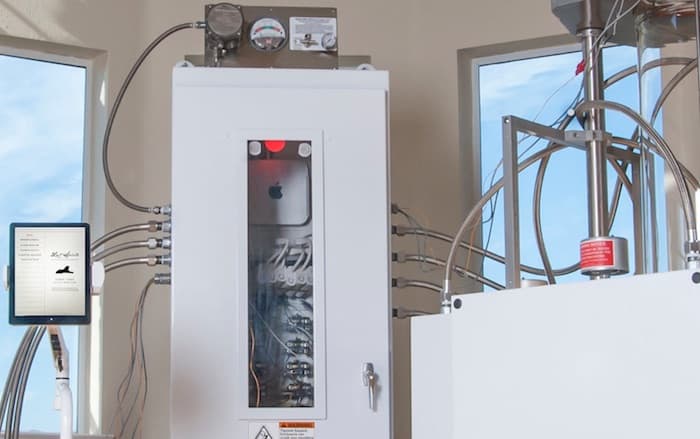 Without diving too far into the complex science, the basics of barrel aging are that with the right catalysts from the wood, acids are turned into esters, and polymers from the wood such as lingins and cellulose are broken down, interacting with oxygen all the while to further transform. As time goes on, the angel’s share also works to concentrate all of the compounds.

According to the website for Terressentia, their TerrePURE system is a “carefully controlled application of ultrasonic energy, heat, and oxygen, and other factors designed to dramatically improve the quality and taste of a wide range of distilled spirits. It works by removing harsh-tasting impurities (“congeners”) present in all spirits.”

Their claim is that using TerrePURE offers the equivalent of four to six years of maturation. Therefore, while they seem to offer some form of accelerated aging, more of the focus seems on filtration, or addition by subtraction, which offers a more limited potential impact.

As for Cleveland Whiskey, they focus on oxygen, temperature, and pressure without an emphasis on how much traditional aging time their process represents. “Much like in a barrel where there are temperature and pressure cycles along with the impact of humidity and atmosphere, we take advantage of similar variations, although more aggressively and in a more controlled environment,” explains Tom Lix, Cleveland Whiskey’s founder and CEO. “I don’t think of it as a way to accelerate aging time but rather a more efficient process to manage flavors extracted from the wood.”

They are also sourcing fresh bourbon distillate from several distilleries as opposed to distilling their own. “Our focus is on the innovation we can provide with our technology,” says Lix. “Given that over 60% of the aroma and flavor in a whiskey comes from the interaction with wood, we strongly believe it’s a great opportunity for flavor innovation without using sugars, syrups, or any artificial flavor or coloring.”

There are major potential advantages to rapid-aging of course. For a brand, it enables them to get a supposedly well-matured whiskey on the market almost instantly. It’s far more affordable, there are fewer barriers to entry, and the return is drastically quicker.

It also offers the potential to easily experiment and try new things. “The real advantage is that you can take risks that you couldn’t take in a traditional distillery setting,” says Davis.

“You could never in a normal distillery setting say OK I’m going to go lay down $10 million worth of barrels from this wacky grain,” says Davis. “If it doesn’t work, we’ll throw it away. Right? That’s never gonna happen. Whereas here in my lab, I can go and do that with only one bottle. And we can sit down drink it, evaluate it, and decide where it goes into the trash can or what.

“We’ll run 100 tests and  out of those 100 tests of different combinations of stuff, you might get four or five products you actually want to make and sell,” he continues. “You’ll get 95 or 96 products which just literally go down the drain… Now the coolest thing is that all of the sudden you can test and trial everything, and pick the winners out of them, which would make zero economic sense otherwise. That’s probably the coolest component.”

Cleveland Whiskey also sees the benefit of experimentation, and is focusing on putting new types of wood to use. “Our focus is really on what we can do with new woods as opposed to simply trying to accelerate a conventional process,” says Lix. “We’ve only just scratched the surface on what we can do with the range of woods available throughout the world, and given that our research and development process is exponentially more efficient than what a more traditional distillery would have to do it’s an area we’re incredibly excited about.” 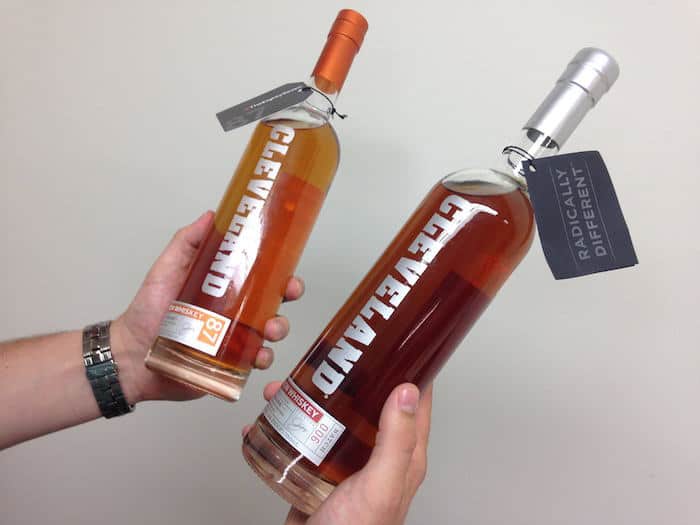 Oak was initially used for barrels due to storage effectiveness and availability, not for specific flavoring purposes. For Lix, that presents a huge opportunity. “What if we could use other woods?” he asks. “What flavors might be available? That’s what we’re discovering.”

Their Uncommon Barrel Collection includes bourbons finished with sugar maple, apple, black cherry, honey locust, and hickory woods. So, instead of using oak in their system, they use these other wood types. “After qualifying as a bourbon by going into the new oak barrel, they’re transferred in to our pressure systems,” offers Lix. “We’re also experimenting with woods like mesquite, pear, pistachio, and others.”

There, he touches on one of the major hurdles for rapidly-aged whiskey: the classification of their products. Can they really be labeled and categorized in the same way as traditionally aged whiskey?

Right now, it depends on the type of whiskey in question. For example, both Scotch and Irish whiskey must be aged for a minimum of three years in casks in order to qualify as such. So when Davis set about to work on a Scotch product, rather than purchasing distillate fresh off the stills, he purchased aged stock he can use as the starting point.

“We just danced around that one with Scotland,” says Davis. “What we ended up doing is going and buying a whole bunch of three-year-old or five-year-old potentially peated malts… but with the rye, we’re actually starting with it brand new, because U.S. regulations are relatively lenient in this respect.”

According to TTB definitions, bourbon and rye need to be stored in charred new oak containers, but there’s no time specification. The spirit could literally enter the barrel, slosh around, and be dumped, and it qualifies. “To comply with regulations, all of our bourbons go into a new barrel but they simply don’t stay there very long,” says Lix. His finished bourbons stay in the barrel for a month, and his Black Reserve stays for traditionally aged for just three months.

According to Davis, the other major challenge is in how his technology would impact the financial bottom lines of the existing industry. The reason why that matters to Lost Spirits is that the impact would lead to major pushback from the industry as it is, likely in the form of changes to those labels and classifications above.

“Your big boys, they don’t really care, it doesn’t really bother them, but they absolutely care if we get the collateral value of their casks reassessed,” offers Davis, explaining industry practice of funding new projects based upon borrowing against the future value of what they’re maturing in their rickhouses.

If this really is game-changing, if they can really churn out 20-year-old bourbon from a lab and it catches on, then the value of millions of barrels of whiskey currently being aged could plummet. “So a lot of what we’ve been doing is negotiating with them on how we can go about commercializing what we’ve done without essentially forcing us into conflict with them,” says Davis.

Of course, this assumes that rapidly-aged whiskey is not only here to stay, but would blow away the traditional competition. That’s far from likely to occur though.

Those big boys would lobby and lobby until Davis and his ilk could bottle and sell “matured brown liquid” or something of the sort without having whiskey anywhere near the label. Then there’s the issue of brand loyalty and the wide range of choices currently available, marketing dollars, distribution, and all the rest.

So How Does the Stuff Actually Taste?

At the time of this publication, I’ve sampled through much of the Cleveland Whiskey range, but have not yet been able to try whiskey from Lost Spirits’ THEA One, or from Terressentia’s TerrePURE.

From Cleveland, I tried their Black Reserve bourbon, and three of their finished bourbons, Hickory, Black Cherry, and Apple. Overall, there’s actually quite a bit to like with these products, and a lot of the right flavors are there.

According to Lix, they’ve conducted 3,600 blind taste tastes of their Black Reserve against Knob Creek, and 54% chose his product. As for my own opinion on the Black Reserve, it was solid, but something was a bit off, almost a lurking plastic or chemical taste in the background. In my head I could almost envision the wood being sucked dry of its compounds within that pressure system and along with the good stuff, too much of everything was sent in as well.

The best of the bunch was the Hickory, and the Black Cherry cries for some fun cocktail experimentation, while the Apple wood seemed more of a swing and miss. Ultimately, it’s enough to keep me intrigued, and I’ll want to continue sampling more from the rapid-aged realm.

So is all of this revolutionary and game-changing, or more of a gimmicky parlor trick? I’ll say it’s somewhere in the middle. I’m not a reborn believer of the rapid-aging revolution, but I’m not writing it off as utter rubbish, either.

Clearly, these companies and their technologies aren’t fraudulent, and the science behind it all is legitimate. We live in a world where they can grow beef in a laboratory. So why can’t they mature whiskey in one?

Of course, “traditional” whiskey isn’t going anywhere, not by a long shot, and thus far all of the rapid-aging products and companies seem like less of a replacement and more of a narrow market extension, and perhaps a glimpse of what the future may hold…

Just imagine, 50 years down the road, and human civilization is beginning to colonize Mars. It’ll be impossible to bring dozens or hundreds of barrels of whiskey to the red planet with us, but we just may be able to distill some once we get there and pop it into a machine. Then we’ll have an approximation of well-aged whiskey the way it used to be made back on good ol’ Earth, wherever our travels in the stars take us. Paired with the finest grade-A lab-grown beef we could find, of course.