Kentucky whiskey distillery Rabbit Hole, based in Louisville, has done pretty well for itself since it was established back in 2012 by founder and whiskey maker Kaveh Zamanian. Anchored by a solid whiskey line up, Rabbit Hole found itself ultimately acquired by Pernod Ricard last year. Now, in another sign of growth, a new higher end series of offerings is being established.

The new Rabbit Hole Founder’s Collection, according to those behind it, is a platform from which Zamanian can “develop special bottlings that showcase his creativity and commitment to the artistry of whiskey making.” His first release in this regard is known as Boxergrail Founder’s Collection Cask Strength Kentucky Straight Rye Whiskey, a “limited edition, cask-strength expression made from the first batches of rye whiskey he ever made.” 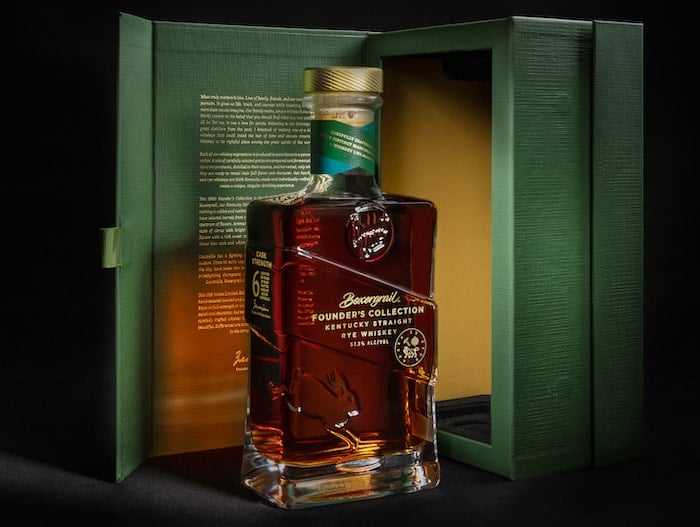 For Rabbit Hole Boxergrail Founder’s Collection, a mash bill of 95% rye and 5% malted barley, noted the brand, was “prepared and fermented at ideal temperatures, distilled to their essence, aged for six years in the wood fired, toasted and charred #3 new American oak barrels that Kaveh personally selected from the very first batches of rye he created, and were harvested from just seven barrels, once they were ready to reveal their full flavor and character.

“This rye whiskey is 100% Kentucky-made and specifically crafted according to Kaveh’s proprietary cooking processes to create a unique and singular drinking experience.”

“I’m extremely proud of our collection of core offerings, each completely unique from all other whiskies,” said Zamanian in a prepared statement. “With Founder’s Collection and by extension, Boxergrail Founder’s Collection Cask Strength Kentucky Straight Rye Whiskey, we are showcasing an even deeper expression of our creativity as a brand, giving me and my team the ability to produce limited edition spirits that are made with originality and our unique approach to innovation.

“With this and future Founder’s Collection releases, we will hand select barrels that embody perfection. These ‘honey barrels’ will be bottled in numbered editions and offered at cask strength to ensure that connoisseurs experience the liquid as it’s meant to be, untouched.”

Plans call for this rye whiskey to be released this October, bottled 114.6 proof and pricing around $195 per 750 ml bottle. Only 1,315 sequentially-numbered bottles will be released, with each bottle getting a special packaging technique that includes embossed-glass detailing of the brand’s label, a gold medal cork engraved with Kaveh’s family crest and a keepsake gift box the whiskey will be placed in.

Official tasting notes make mention of “an intriguing nose of butterscotch, mint, dill and citrus. On the palate, rich flavors of caramel, black pepper, vanilla and herbaceous spice envelope the palate before yielding to an enduring finish of black tea, sweet vanilla and citrus.”

32
Shares
1.9k
Views
Share on FacebookShare on TwitterGet Our Newsletter
Cheers to the Dads! Personalize a bottle of his favorite whiskey to create a modern gift for the modern man. Use code: FATHERSDAY20 for $20 off your next order of $100 or more at ReserveBar