In what could prove to be a boon for American whiskey makers large and small alike, new legislation has been introduced into both chambers of Congress which would significantly cut federal excise taxes on newly produced spirits. It is, not surprisingly, being backed by major distillery industry groups.

The Distillery Innovation and Excise Tax Reform Act of 2015, as it is being called, would lower the federal excise tax from $13.50 per proof gallon to $2.70 per proof gallon on the first 100,000 gallons produced per year, and $9.00 per proof gallon thereafter. On the House of Representatives side it was introduced by Rep. Todd Young (R-IN) and Rep. John Yarmuth (D-KY), while in the U.S. Senate it was presented by U.S. Senators Gary Peters (D-MI), Dan Sullivan (R-AK) and Kirsten Gillibrand (D-NY).

Young, citing figures from the distillery industry groups backing the bills, the Distilled Spirits Council and the American Craft Spirits Association, noted that “currently more than half the purchase price of a bottle of spirits is used for taxes and fees, making it one of the most heavily taxed products in the country.” 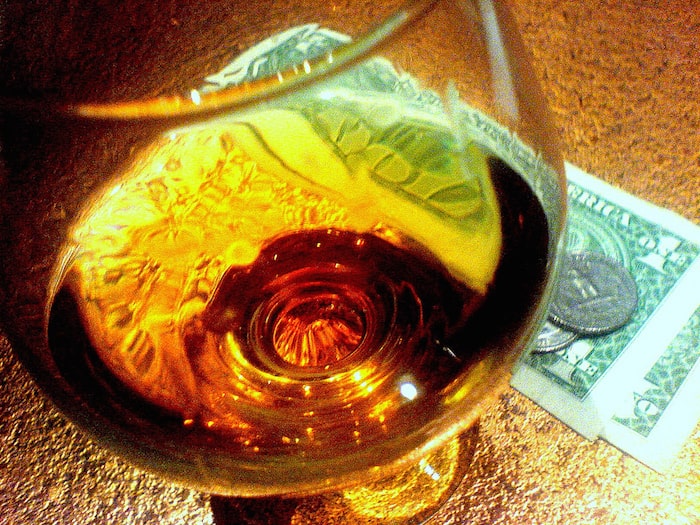 More money may soon stay in the coffers of whiskey makers. (image via Mick O/flickr)

“All around southern Indiana, many new craft distilleries are popping up, creating jobs and adding to the tax base,” said Young in a statement on the whiskey tax reduction. “But there’s a lot of red tape involved in getting a new distillery off the ground, and this bill helps reduce that burden. In addition, we have many large, established distilleries in our region of the country, and this bill will help them, too.”

On the Senate side, meanwhile, Peters, touring the Traverse City Whiskey Company in Michigan, discussed the legislation also, saying that “as a a member of the Senate Small Business Committee, I’m proud to introduce legislation that will help ensure craft distilleries like Traverse City Whiskey Company can purchase new equipment, hire more employees and continue boosting our state’s economy.”

He estimated that for an average young distillery like Traverse City producing 30,000 proof gallons in a year, “reducing the excise tax to $2.70 proof gallon is a savings of $324,000 – the price of a new still or 6 new staff.”

“It is significant that the distillers of all sizes are united behind this important hospitality industry legislation,” added Distilled Spirits Council CEO Peter Cressy.  “We thank the sponsors for recognizing the economic impact passage of this bill will have for our industry.”