It’s what brought its founder Christian Krogstad to Oregon in 1991 for an apprenticeship in craft brewing and a job with McMenamins. After spending 12 years brewing beer, he noticed a similar evolution happening with craft spirits: “There was some overlap between brewing and distilling,” Krogstad explains.

He first started trying self-funded experiments with neutral spirits like vodka, eventually moving to gin. House Spirits’ Aviation Gin is their oldest product and continues to be one of their best-sellers, along with two kinds of aquavit, Volstead vodka, and coffee liqueur. 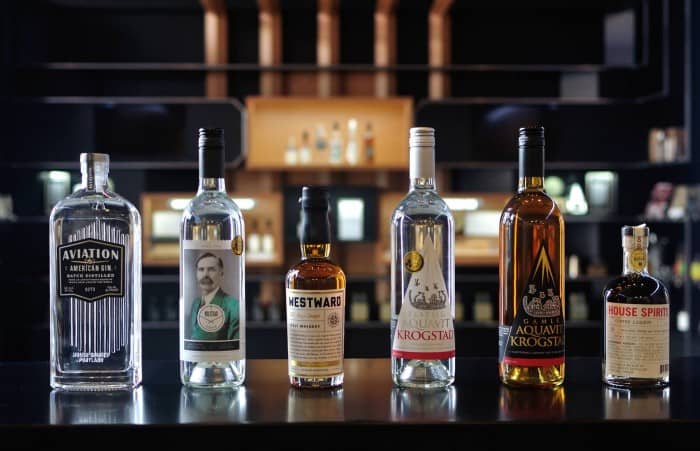 In 2015, House Spirits moved from SE 7th to their new tasting room and distilling facility at 65 SE Washington. Formerly a storage shed for a roofing company, the space has transformed into a fresh and modern drinking and distilling destination. Also, a plus for Portland: Parking!

Measuring in at about 14,000 square feet (another 28,000 square feet of barrels is located in nearby Clackamas, Oregon), the new space offers a tasting room with a view of the distillery, private rooms for cocktail classes, and a gorgeously appointed, backlit library to showcase House Spirits’ history of tasty successes as well as the experiments that didn’t last (RIP, rum and raki). House Spirits also made a white dog whiskey, but it’s also primarily part of those spirits in the sky. While they still bottle it, Krogstad says, it’s mostly just for education or tasting.

Since this is a whiskey blog, let’s focus on their Westward Whiskey (formerly known as the House Spirits brand). Made from 100 percent malted barley, the wash is then fermented with ale yeasts for a longer fermentation process: 5-6 days, versus a typical shorter 2-3 days. Westward is double distilled before it ages in charred white oak for two years at 62.5 percent, and then is bottled at 45 percent. All this allows for a whiskey that is flavorful and balanced, elegant but also robust.