Arrogant Bastard Ale is considered a legendary beer among many, helping in a large way to put popular mid-size brewery Stone Brewing on the map some years ago after its debut in 1997. It only made sense, therefore, with the rise of craft whiskey in recent years that it would be made into a whiskey.

The new Arrogant Bastard Whiskey, according to those behind it, is the result of a team up between Arrogant Consortia, a wholly-owned imprint of Stone Brewing, and Foundry Distilling Co., an Iowa distillery that has a program called the Brewer-Distiller Alliance initiative. The latter’s program “aims to work with outstanding breweries across the nation to produce remarkable, distinctive whiskeys from their beer recipes. The breweries produce the wort using their recipes, and Foundry then ferments, distills, and barrel ages the spirit to create whiskey.” 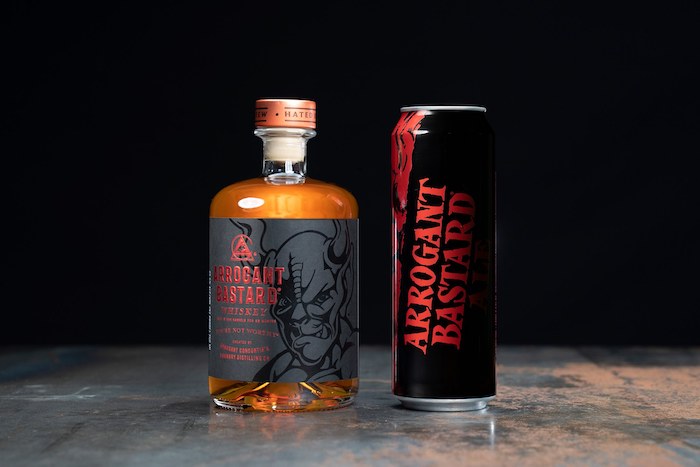 The way it works between the two is that the whiskey “started as mash produced from Arrogant Consortia in Escondido, California. The notorious ale’s unfermented worry was then transported to be refined at Foundry Distilling Co.’s distillery, located in the Historic Valley Junction area of West Des Moines, Iowa. This whiskey has been aged for 26 months in 30-gallon new charred American oak barrels and has notes of citrus, herbal tea, and allspice with a finish that consists of a warming, bright citrus zest.”

“We are excited for people to try this one-of-a-kind world-class whiskey,” said Scott Bush, owner of Foundry Distilling Company, in a prepared statement. “It has been a great pleasure working with Arrogant Consortia to distill an amazing spirit.”

Arrogant Bastard Whiskey is currently available for purchase in limited quantities in Iowa and at Foundry Distilling Co., “while beer and spirit enthusiasts in California can expect to get their hands on this whiskey on April 20th, 2021.” It is bottled at 97 proof and considered an American malt whiskey. It also follows in the footsteps of previous brewery/distillery collaborations between Foundry and the likes of Boulevard Brewing Company and Peace Tree Brewing Company.

13
Shares
1.7k
Views
Share on FacebookShare on TwitterGet Our Newsletter
Get The Macallan® Rare Cask at ReserveBar. Shop now!