The Philadelphia-based distillery said the new releases are a part of a series of wine-finished Kinsey products that are available for purchase in the distillery’s retail space and online to ship across the state of Pennsylvania.

“Few are aware that the state of Pennsylvania is credited with producing the nation’s first whiskey brands, but we want to change that,” New Liberty Founder, Master Distiller and industry veteran Robert Cassell said in a prepared statement. “By expanding our robust catalogue of craft spirits, especially our whiskies, we’re hoping to introduce casual sippers and bourbon nerds alike to the rich history that the Kinsey brand has to offer.” 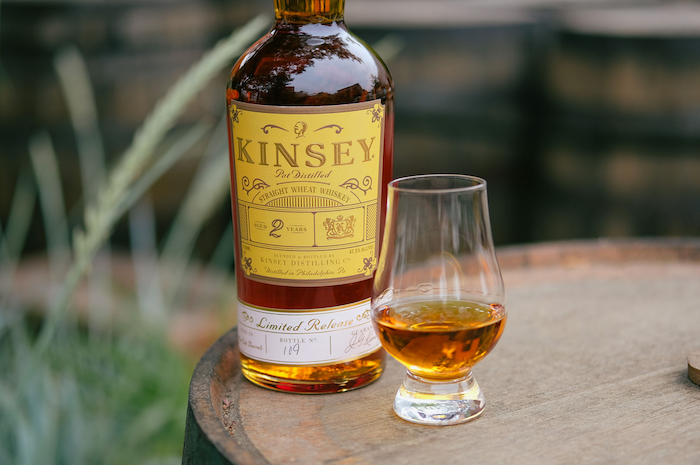 Kinsey Pot Distilled Straight Wheat Whiskey was pot distilled and aged for two years in highly seasoned new char American oak barrels. It comes in at 95 proof and carries notes of saw dust, leather, dried spice, cardamom, carraway, and anise on the nose, giving way to a round mouthfeel and notes of black tea, the distillery says. The spirit, made with 73% wheat and 27% malted barley, has a long finish that bears traces of sweet florals and fruit.

Kinsey Chardonnay Cask Whiskey was made when the distillery’s Kinsey American Whiskey was aged in an ex-barrel of the finest French wine that was sourced and shipped to Philadelphia.  The result is a light bodied whiskey finished in Chardonnay barrels with notes of oak, caramel, and crisp autumn apples, the distillery said.

On the nose, this 80- proof spirit delivers what’s said to be a fascinating mix of aromas including florals, shortbread, apple and citrus. The base is made of Kinsey American 4-Year Whiskey aged in Californian Chardonnay barrels for approximately 1 year, with a mash bill of 99% corn and 1% malted barley.