After joining forces in 2019, Buoy Beer & Pilot House Distilling are set to expand on the Riverwalk in their hometown of Astoria, Oregon.

The distillery, as part of a recent expansion plan, let it be known it is set to move into a former fish processing plant adjacent to Buoy Beer. The new facility will include a new 5,000-liter copper pot still and column, a new fermentation cellar with a mash mixer and a mash filter, and a 12,000 square foot second floor devoted to barrel aging. Relocation and the new equipment will allow the team to ramp up production, as well as expand the whisky and bourbon lines.

“This will give us the opportunity to compete on a national level by giving us the tools needed to increase our production capacity,” Head Distiller of Pilot House Distilling Larry Cary said in a prepared statement. “We’ll have better access to the raw materials needed to further increase the quality of already award-winning products.” 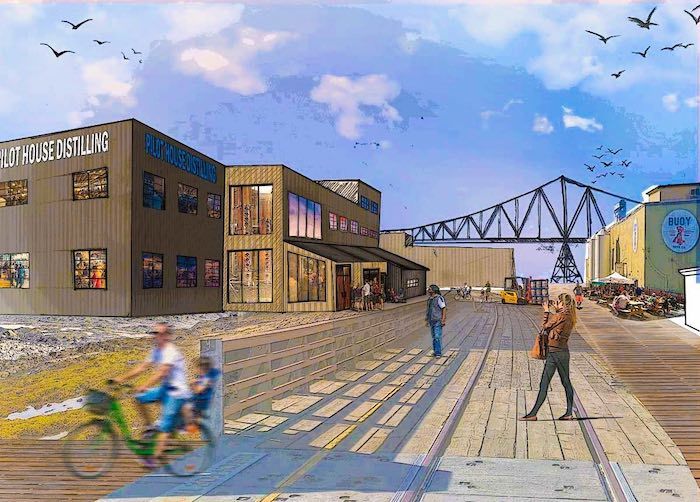 As for the brewery side of things, this production expansion will more than double Buoy’s capacity over the next 5 years with the new building set to house a 50bbl four-vessel brewhouse, along with more fermentation tanks to support demand throughout the Northwest. A pipe bridge will be installed between the Astor building and the current distillery where lager tanks, bright tanks, kegging lines and higher-speed canning lines will be installed. Pipe bridges will carry wastewater from the brewery and distillery to the brewery’s own treatment facility that will process the water before it enters the city’s wastewater system.

A new tasting room, walk-up “take & go” food option that will feature local seafood to complement the cocktail bar and an upscale seafood restaurant on the second floor northeast corner will also be apart of the new expansion, as well as additional space in the Buoy Beer restaurant that will expand to the entire river view side. There are also plans in the works to continue the company’s sustainability efforts with expanded CO2 recovery, growth of its rooftop solar array, electric vehicle charging stations, rooftop beehives and herb gardens. Plans for the future include the development of a large second story event space to host future weddings, events, and meetings once pandemic restrictions are lifted.

“It’s very humbling to look back at how far we’ve come in the past 7 years,” Director of Brewery Operations Kevin Shaw noted.  “I had faith in the project when I came on board in 2013 but this exceeds my wildest dreams for the company. Being able to increase production to fulfill orders while continuing our consistency and quality is really exciting plus… who doesn’t like shiny new things?”

The new changes for the distillery are set to take place later this year.

23
Shares
454
Views
Share on FacebookShare on TwitterGet Our Newsletter
Get The Macallan® Rare Cask at ReserveBar. Shop now!