Oregon Oak: The Story Of A Regional American Whiskey Barrel 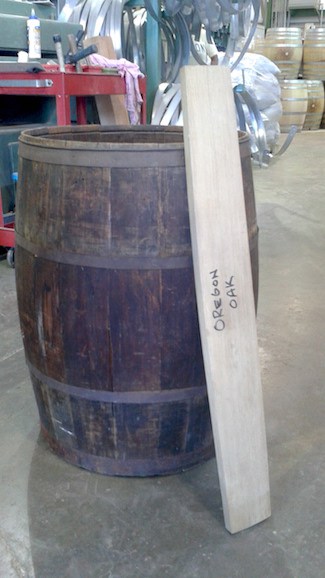 When spirit touches wood, there is an interaction so profound it borders on magic.  Today we call magic chemistry.  We know that tannins found in green wood break down through exposure to the elements into gallic and ellagic acids.  When alcohol is stored in barrels made of aged wood, these chemicals leach into the spirit, creating the signature flavors of our favorite whiskies, for example.  But that’s not half the story.

Each wood has a chemical fingerprint.  These fingerprints determine which wood works for barrels, and which is better used for guitars or outside decking.  Even without knowing the science, ancient Europeans figured out that French oak in particular made excellent containers for wine and spirits.

Fast-forward hundreds of years, as American oak takes its place as the wood of choice for New World whiskies.   Now, thanks to the science, another species has shown it has what it takes to make the stave: Oregon oak.  Similar in chemical fingerprint to the revered French oak, Oregon oak is beginning to make its mark in the world of whiskey.  To find out just how and why, I paid a visit to Oregon Barrel Works in McMinnville, Oregon.

Located in the rich heart of Oregon wine country, Oregon Barrel Works was founded in 2007 by Rick deFerrari. Taking his apprenticeship with a French cooperage in Bourdeaux, deFerrari and his team now make barrels with centuries of skill behind them.  I caught up with them as they were preparing for the rush of an early grape harvest.

Oregon oak is a specialty of deFerrari.  The wood, he says, is full of character, with deeper tannins than American white oak.  The results on wine are so striking that several wineries now use Oregon oak as a percentage of their production of powerhouse wines like zinfandel, primativo and pinot noir.  When asked how the wood would fare when filled with whiskey, deFerrari was confident of its superior qualities.

So why aren’t more distilleries using Oregon oak?  It turns out it is not just a matter of knowing.  Sourcing is also a problem.

Oregon oak is not currently what one would actually consider a commercial crop.  Managed oak forests in France, England and even the Eastern U.S. take 80-100 years to mature.  This is a long lead item, but proven well worth the management. deFerrari is trying to convince more foresters to give Oregon oak a chance at commercial production.  But why commercial? 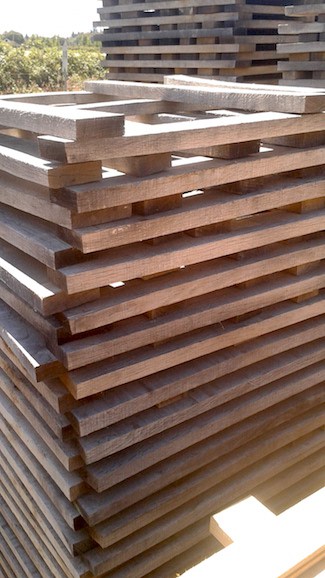 It turns out that only the straightest, tightest wood can be used for barrels.  No knots.  no twists.  Even the hint of a twist in the grain can ruin a stave, and the whole barrel.   The bark, obviously, cannot be used.  Several inches in from the bark is called sapwood, and is too porous.  The very core wood also cannot be used, as it is too hard to bend.  The wood for barrel staves is inbetween and usually only found from the part of the tree growing from the ground to the first branch, and is called heartwood.  Perfect wood is very hard to find.  When trees are grown close to one another – as they are in commercial farms – they grow straighter, taller, faster.

Despite the scarcity, more distilleries are catching on to the difference Oregon oak can make in their spirits. deFerrari, for example, has partnered with Rogue to set up their own cooperage, a setup we first covered a few months ago.  He provides training for their coopers and will supply them with Oregon oak staves to make their barrels.  Also in Oregon there’s Eastside Distilling in Portland, using Oregon oak to finish their Burnside Bourbon; Clear Creek Distillery with their McCarthy’s Oregon Single Malt and Immortal Spirits, who claims they have put “every single last drop” of their whiskey to age in the native wood.

When asked what it would take to order an Oregon oak barrel from Oregon Barrel Works, deFerrari laughed, saying “about four years.”  Finding the wood takes time, but it also takes three years after it is carefully cut and stacked outside to age properly before it is usable.  And then, you need to get in line behind the time-sensitive delivery of barrels for the wine industry.

“Whiskey can take its time, though,” he said.  And he’s right – there’s no rushing the transformation for raw spirit to elegant whiskey.  It is the kind of magic worth waiting for.

262
Shares
609
Views
Share on FacebookShare on TwitterGet Our Newsletter
Get The Macallan® Rare Cask at ReserveBar. Shop now!