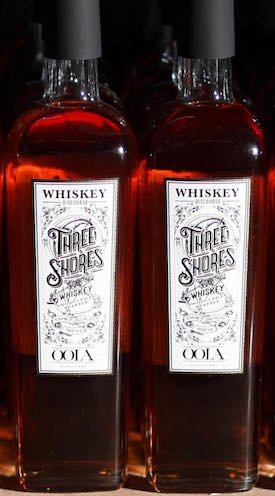 Oola Distillery has once again turned to its very limited edition Discourse series of whiskies, which focus on bringing together uncommon elements to foster “conversation” about whiskey, with a new release. Its last bottling, Smoked, only surfaced late last year, and now we are on to something known as Three Shores World Whiskey.

Oola Discourse Three Shores Whiskey, according to the distillery, brings together into one blend unspecified Highland Scotch and Canadian whiskey, along with Oola’s own American high rye. According to them,

the process begins with the Highland Scotch and the Canadian Whiskey going into American Oak barrels for up to one year of additional aging. This is when the integration begins. All three whiskeys have influence from the American Oak that will later contribute to the beautiful balance that we were able to achieve in this whiskey.

“All three whiskeys are top representations of their respective styles,” said Oola’s Kirby Kallas-Lewis in a statement. “The goal here was to create something that excels beyond the individual components—the sum is definitely greater than the parts in this well-balanced spirit. Enjoy this conversation. I’m sure you’ll agree that it gets all the more interesting when diverse opinions are bellied up to the bar.”

Three Shores is bottled at 47% ABV, and there are official tasting notes below from Oola. It is now just coming to retail, pricing at around $60 a bottle.

A whiff of smoke coupled with sweet sea brine on the nose of three shores starts the conversation. This is followed by a spicy clove and cinnamon note, contributing a complexity mid-palate on its way to a lingering finish of rich, ripe pear and candied stone fruit.