Chemist Spirits, a distillery based out of Asheville, North Carolina, recently announced the release of their Founder’s Reserve Single Malt Whiskey. The spirit is named after chemist and founder Debbie Word, who curated the beverage from hand selected barrels and local artisan malts.

Female led by a mother-daughter partnership, Chemist Spirits specializes in both gin and whiskey and was created through what’s described as an appreciation of traditional distilling and modern science. Danielle, Debbie’s daughter, is a chemist who brings her science background to the small, family run business. The distillery is inspired by the turn-of-the-century Chemists who continued to persist through the prohibition era. 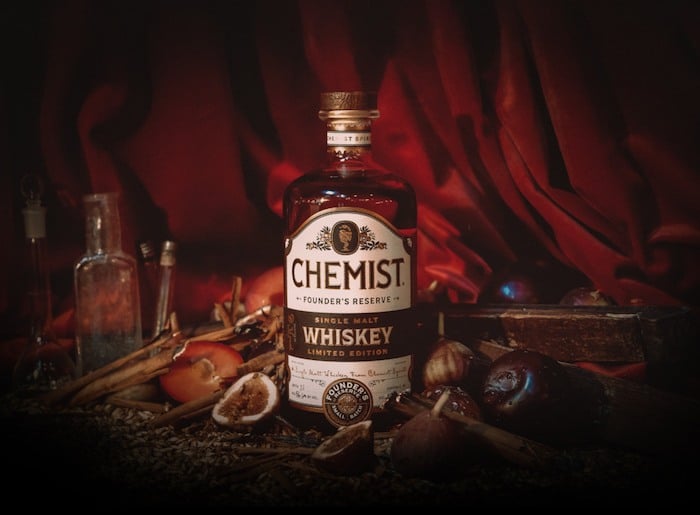 It is noted by the distillery that its name “pays homage to those brilliant scientists and today we are refining the science of fine spirits, artfully crafted in Asheville, NC.”

Crafted in partnership with Riverbend Malt House, the spirit is aged in charred American Oak barrels to create what’s described as “a deep Scottish-style red ale and single malt whiskey blended to cask strength.” Official tasting notes speak of expecting “the color to be amber with copper tones. The nose will tickle and tease of toasted oak, honey, apricots and fig. A sultry dance on the tongue, flavors of dark stone fruit, Amaretto, toasted cereal, and vanilla tobacco leaf take the lead into a creamy, full-bodied and strong willed mouthfeel.”

Riverbend Malt House, for its part, is a barley malt supplier based in North Carolina that supplies local craft brewers and distillers. The company has a mission based off of supporting family farms and supporting Southern agriculture.

The new Chemist Spirits Founder’s Reserve Single Malt Whiskey was released last month as a limited 500-bottle batch that’s available in the Chemist’s Tasting Room onsite. It has been bottled at 113.2 proof.