The world of Florida craft whiskey, until this moment consisting mostly of offerings from Njoy Spirits and Florida Farm Distillers, is set to grow by three with the unveiling of some new expressions from another young distillery. This operation, called Timber Creek Distillery, is making use of mostly locally grown grains in its whiskies’ mash bills.

Here are the new whiskey bottlings Timber Creek is releasing, according to information from the distillery:

Timber Creek Florida Bourbon is a wheated Bourbon made with a blend of corn, wheat and barley that creates a smooth, easy to drink bourbon perfect neat, on the rocks, or in your favorite drink.

Timber Creek Reserve Florida Bourbon Whiskey is a rare four-grain blend that brings together the sweetness of corn, balanced by wheat with a touch of spice from rye and the smooth taste of barley. Reserve Bourbon is remarkably flavorful and complex for a young bourbon.

Timber Creek Rye Whiskey is a one-of-a-kind rye whiskey made from 100 percent Florida 401 Black Rye, a strain that grows only in Florida, with a uniquely bold flavor unlike any other rye.

Timber Creek said as well that their whiskies “are made from at least 95 percent Florida grown grains using separate barrels for each grain.” No specific age statement was given, but my assumption would be these are young, young whiskies in keeping with the spirit of the craft movement. 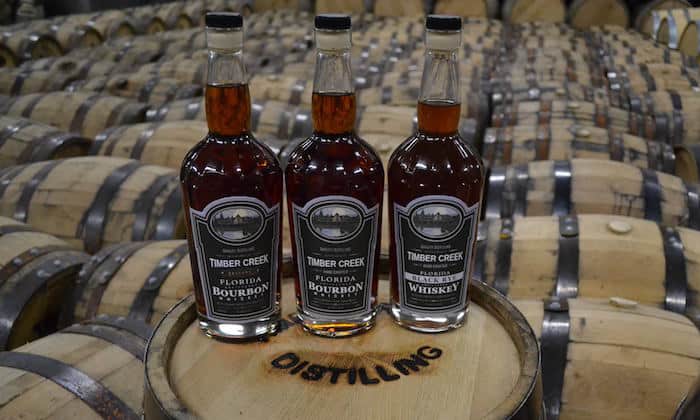 As for the distillery, it got its start in the barn of a 1,400-acre family farm in Florida. It has two co-founders, former Silicon Valley start up businessman Camden Ford and his neighbor Aaron Barnes, who happens to be a home brewer. It is Barnes who is handling the distilling side of the operation.

“I really didn’t know what to expect, but realized over a few glasses of whiskey on the back porch that we had a lot in common, including the passion for quality beverages,” said Aaron Barnes, Master Distiller at Timber Creek, in a statement. “We wanted to create a whiskey that embodies the Florida Panhandle and share it with our community, like sharing a drink with a neighbor.”