2020 has certainly been one of the weirdest years on record in a long time. It thus seems fitting that Tamworth Distilling out of New Hampshire, who we recently wrote about around their rye whiskey influenced by maple tapped from so called “graveside maple trees,” would now have another new offering that seems to capture the essence of things – a deer flavored whiskey.

The new Tamworth Distilling The Deerslayer, according to those behind is, well, let’s just let the brand run with the official description. They say it is “a surprisingly delicate-bodied whiskey flavored with the flora and fauna of New Hampshire in autumn — specifically, venison. The Deerslayer is crafted with three-year-old white wheat whiskey that allows the venison flavor to truly shine and distilled with slow-smoked red deer venison and seasonal ingredients including porcini mushrooms, cranberries, juniper berries, and green peppercorns. 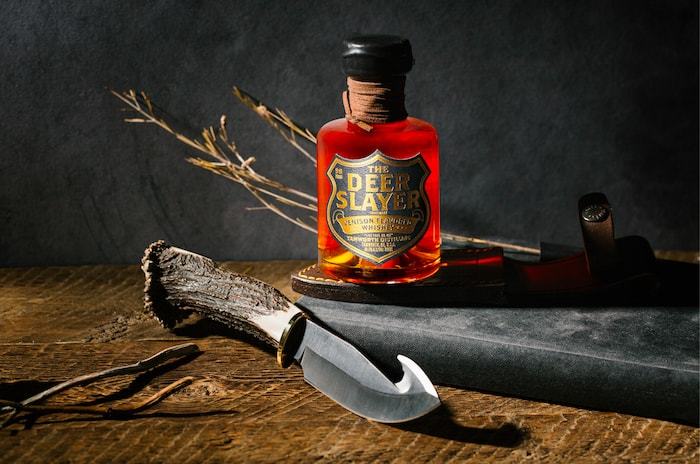 “Ideal for venison-lovers and non-vegans alike, the savory and smoky notes characterize this one-of-a-kind spirit, with subtle spice on the palate up front and a lingering, gamey finish.”

It is said that Deerslayer is “perfect for the risk-loving imbiber or avid hunter” and that “the venison flavored whiskey is a celebration of Tamworth Distilling’s core mission of wilderness to bottle — and is undoubtedly non-vegan.”

“No matter what the world thought 2020 would be like, it’s safe to say that everyone was wrong,” said Steven Grasse, owner of Tamworth Distilling, in a prepared statement. “I have been interested in the idea of using venison … as [a] flavoring [agent] for some time. The gaminess of the venison lends itself as a savory compliment to the sweetness of the wheat whiskey creating a truly creative carnivorous concoction.”

Plans call for The Deerslayer, bottled at 99 proof, to price at $65. For the curious as to how this weird whiskey was actually born, a more detailed description of its creation is as follows, according to brand information:

We sourced our red deer venison from a local New Hampshire farm, then hand-chopped the meat and tossed it with cranberries, porcini mushrooms, juniper berries, and green peppercorns. After fermenting overnight to accentuate the meat’s delectable gaminess, it is then slow-smoked over a mix of seasoned branches from New Hampshire’s boreal forests. A 3-year old white wheat whiskey serves as a lighter-bodied whiskey backbone, allowing the truly unique flavoring to shine through after its final distillation in our rotary evaporator.

Tamworth, by the way, is also known for a bourbon whiskey that “proudly features an old-world flavoring technique that uses the oil extract from the castor gland of the North American beaver.” This odd concoction, known as Eau De Musc, is also currently available for sale through the distillery for $65.