Boulder Spirits out of Colorado recently launched a unique “Adventure Kit,” which they are calling a whiskey tasting “experience in a box.”

Each of the kits contains 50 ml bottles of six different Boulder Spirits whiskeys and they are available for $29.99 in Colorado liquor stores and at Vapor Distillery in Boulder, Colorado, where Boulder Spirits products are distilled.

The Adventure Kit also includes a tasting sheet and a QR code that brings tasters to a 30-minute video filmed at Vapor Distillery, inviting them on a sampling tour of each whiskey, guided by Boulder Spirits Owner and Chieftain Alastair Brogan and Brand Ambassador Ryan Negley. 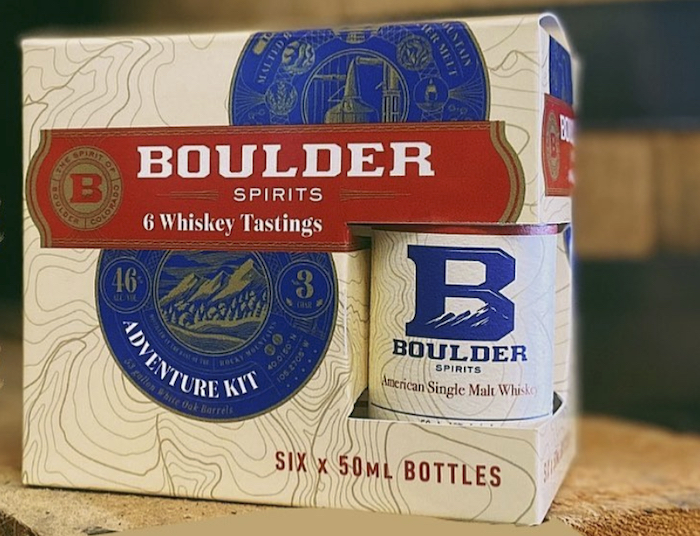 “We wanted to find a way for whiskey lovers to get the experience of visiting our tasting room and having us pour them a drink and explain what they’re tasting,” Boulder Spirits owner Brogan said in a prepared statement. “These kits seemed like an ideal way to let people try our whiskey and also provide an educational video from us here at the distillery.”

Brogan said the Adventure Kit was designed as a gift for whiskey lovers and as an inexpensive way to sample what Boulder Spirits has to offer. The kit includes three American single malt whiskeys (New American, Peated Malt and Bottled in Bond) and three bourbons (Straight Boulder Bourbon, Sherry Cask and Bottled in Bond).

The outer box features the brand’s logo in gold foil on a topographical map of Boulder County. Each sample bottle is color coordinated with its corresponding Boulder Spirits whiskey bottle label to help tasters recognize the samples they liked on the store shelf.

And, according to Brogan, Vapor Distillery’s copper pot still is also perfect for distilling barley in accordance with rules for the emerging category of American Single Malt Whiskey (ASMW).

In 2016, the American Single Malt Whiskey Commission was founded to create a standard of identity for the category, which specifies that ASMW contains 100 percent malted barley, is produced entirely in the U.S. at one distillery, and is aged in oak casks.

Boulder Spirits ages its American single malt whiskeys in white oak barrels made from Missouri oak trees, which Brogan said he believes are the highest quality white oak in the United States. Boulder Spirits gets its water from Eldorado Springs just outside Boulder, said to be one of the purest natural springs in the world and judged to be the best-tasting water in North America.