Frey Ranch Distillery, as we first mentioned when covering the launch of their bourbon some months ago, is making a name for itself out of Nevada through its estate operation of growing, malting and distilling 100% of its whiskey grains on-site. This approach seems to reflect a higher quality product for such a young age, and now they are at it again with the recent release of a new rye whiskey that qualifies for bottled-in-bond status.

The new Frey Ranch Straight Rye Whiskey, according to those behind it, has a mash bill of 100% Winter Cereal Rye. It hits the marks for being labeled bottled-in-bond, including being produced by a single distiller within one season, aged for a minimum of four years in a bonded warehouse and bottled at precisely 100-proof. 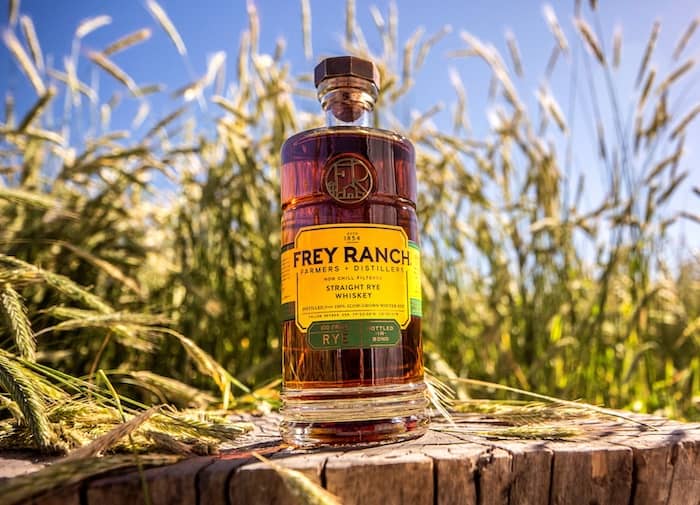 “As our rye was aging,” said Frey Ranch co-founder Colby Frey in a prepared statement, “we knew we had something special on our hands based on the reactions of those who sampled it. Nearly everyone commented on its smoothness and how easy it is to sip, which is rare for a 100% rye mash bill.

“We’re very proud of how our first-ever Straight Rye Whiskey turned out and can’t wait to share it with consumers.”

Frey’s family, the distillery team noted, has a history of farming in the region that dates back to 1854 and lives on through him today. He started the distillery in 2006 with his wife and co-founder, Ashley Frey, and the two of them are said to work closely with “Master Distiller and Certified Crop Advisor, Russell Wedlake, to carefully oversee each stage of the production process, ‘from ground to glass.'”

Plans call the first two batches of Frey Ranch Straight Rye Whiskey, numbering 3,000 and 2,400 bottles, respectively, to be released at a price point of around $60 per 750 ml bottle. You’ll find some official tasting notes below for your consideration.

Nose: Intense notes of wood and rye spice, vanilla, and caramel lead into a glorious perfume of grapefruit zest, almond, and honey

27
Shares
758
Views
Share on FacebookShare on TwitterGet Our Newsletter
Get The Glenlivet 18 Year Old at ReserveBar. Shop now!