Nelson’s Green Brier Distillery: The Past, Present and Future of Tennessee Whiskey

Since Prohibition, two players have dominated the realm of Tennessee whiskey, and their names were Jack and George. But Mr. Daniel and Mr. Dickel were relatively small producers during the late 19th and early 20th centuries when the preeminent distiller of Tennessee whiskey was a man named Charles Nelson.

Although Nelson’s Green Brier Distillery did not survive the 24-year discontinuity of business during Tennessee’s Prohibition from 1909-1933, generations later, two members of the Nelson family have rekindled the entrepreneurial spirit of their ancestors and are seeking to make their own name in the distilling business. Even if that name mirrors the original.

Andy and Charlie Nelson are the owner/operators of the modern day Nelson’s Green Brier Distillery located north of downtown Nashville in Marathon Village, and old auto factory from the early 20th century. They have taken it upon themselves to revive their family brand after decades when it had faded from the collective memory of the public, and even the Nelsons themselves. But once they discovered that history, as Charlie relates, “we decided that this distillery was what we were put here to do.” The story of Nelson’s Green Brier then and now is truly remarkable.

Their great-great-great grandfather Charles Nelson emigrated from Germany at age 15 with his family aboard the steamship Helena Sloman  in 1850. For safekeeping during the passage, his father, John Philip Nelson, converted the family’s savings into gold bars which were sewn them into the lining of his jacket. Unfortunately, John Philip was washed overboard during a gale and, laden with gold, sank straight to the bottom.

Arriving in the U.S. wearing only the clothes on his back, young Charles Nelson settled in Cincinnati, learned the butcher trade, and eventually moved to Nashville, Tenn., and opened a grocery store just prior to the beginning of the Civil War. In his shop, Nelson traded in three things every man was looking for: meat, coffee and whiskey. 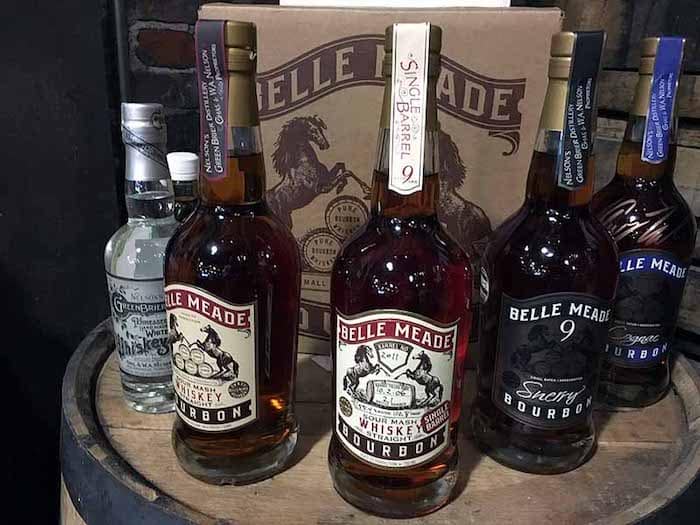 Some of the distillery’s Belle Meade offerings. (image via Steve Coomes)

Seeing the potential for profit in the spirits biz, Nelson purchased a distillery in nearby Greenbrier, Tenn., which provided his whiskey. He invested in an expanded production facility to keep up with the demand for his products, and by 1885, he was selling almost 380,000 gallons of Nelson’s Green Brier Tennessee Whiskey per year. It seemed like every farmer who grew a row of corn was also distilling and selling whiskey, and there were more than 1,000 registered distilleries in the state at the height of production before Prohibition.

Looking to protect the integrity of his products, Charles Nelson joined fellow distiller, George Dickel, to lobby the state legislature to establish and protect a legal definition of Tennessee whiskey, a distinction that remains today. After Nelson died in 1891, his wife Louisa took over the distillery and operated the company until it was forced to close in 1909 when Tennessee enacted Prohibition, much earlier than the rest of the country.

Fast forward almost a century to the story of Charlie and Andy, the triple great-grandchildren of Charles and Louisa. The two industrious young brothers learned of the family’s whiskey history and the legend of a progenitor washing overboard, but they figured it was a tall tale relatives shared at family reunions. In a fortuitous stroke of luck, however, Charlie and Andy’s father took them on an errand to Greenbrier to visit, ironically, a butcher who had a load of beef for them.

The butcher told the Brothers Nelson that they were actually across the street from an old Nelson’s Green Brier warehouse and that the original spring that fed the distillery still ran pure nearby. They took a short trip to the spring and drank from it before stopping in at the Greenbrier Historical Society. Suddenly a trip to pick up meat had turned into a historical scavenger hunt. When the museum curator showed them two original bottles that once held Nelson’s Green Brier Hand Made Sour Mash Tennessee Whiskey, their fate was sealed.

The boys’ world turned upside down and they realized that it was their destiny to restart the old family business. Easier said than done, of course. Eight years passed between that epiphanic visit to Greenbrier before the first gallon of whiskey came off of the still at Andy and Charlie’s modern new distillery located in Marathon Village, just north of downtown Nashville. In between, the brothers worked constantly to gather together the history of the company while raising funds to construct their own facility.

One thing they discovered was that Charles Nelson actually sold more than 30 brands through the years, including multiple recipes of Tennessee whiskey, bourbon, rye and even single malt whiskey. Many of those brands were actually purchased products from other distilleries that Nelson bottled and labeled for distribution. So Andy and Charlie took a similar approach and began sourcing whiskey to brand under their name while they amassed resources for their own distillery

Andy Nelson recalls how difficult is was to decide to use sourced whiskey.

“We never liked to hear someone say ‘They just buy their juice,'” he said . “We have created something unique by effectively blending three different recipes, and we’re still buying new barrels for the future and laying them down.

“I’ve gotten a little more thick-skinned. It’s gratifying that both consumers and the industry realize we really did have a goal in mind.” 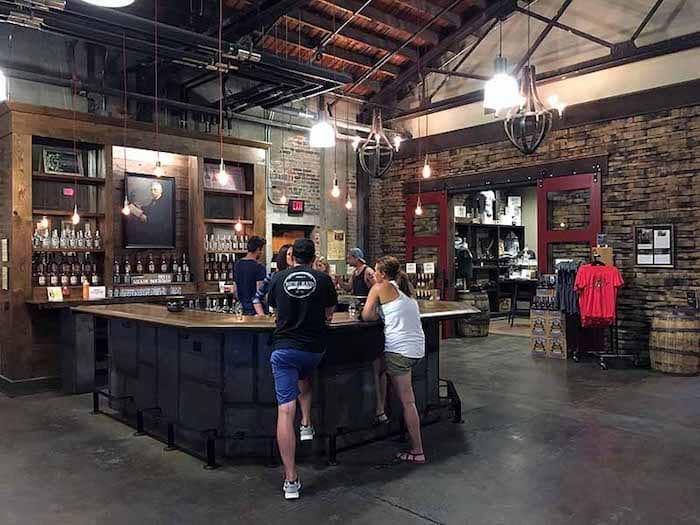 Their first product was Belle Meade Bourbon, named after an original Nelson’s Green Brier brand. The Nelsons were very transparent that this was sourced bourbon, but also proud that they personally selected the barrels and blended different mash bills to create a unique product. Belle Meade Bourbon has since become quite popular with wide distribution in markets across the country.

As the brand grew, the Nelsons began to distilling their own future flagship Nelson’s Green Brier Tennessee Whiskey a little more than two years ago. While the wheated whiskey lies in repose maturing in their warehouse, the Nelsons have continued to sell Belle Meade Bourbon, as well as a limited run of an experimental corn whiskey and small bottles of their future 70% corn/15% rye/15% wheat white dog that will eventually be their Tennessee Whiskey. Early tastes of the white dog and barrel sampling of the young aged stock are quite promising.

Still, Andy and Charlie wanted to do more to differentiate their spicy, high-rye Belle Meade Bourbon and began finishing some of it in a variety of used barrels from European distillers. The first release of their new series of barrel-finished products was an Oloroso Sherry Cask edition, profiled here at The Whiskey Wash. The Nelsons selected nine-year-old barrels to blend in small batches and age for an additional three to four months of finishing in 500-liter butts that previously held Spanish sherry. Bottled at 90.4 proof, this product was the winner of the Double Gold Medal and Best Special Barrel Finish Bourbon at the 2015 San Francisco World Spirits Competition.

Andy and Charlie Nelson next released a special Cognac Cask Finished Belle Meade Bourbon, this time made from a blend of six to nine-year old bourbon stocks. The Nelsons continue to demonstrate their talents as blenders with this choice as the  younger whiskey complements the spicy and fruity aspects of the 350-liter hogsheads made of French Limousin Oak, casks previously used for 12 years to age one of the world’s premiere Fine Champagne XO Cognacs.  The older stock included in the blend matches well with the softer flavors of the brandy. Also bottled at 90.4 proof to better exhibit the complexity of the spirit, this is a great bourbon to drink neat. Carin Moonin reviewed this product here for The Whiskey Wash.

The Nelsons developed their talents as blenders while they were still developing what would eventually become the first batches of Belle Meade Bourbon. Andy remembers that it was hard work, but fun.

“We spent a lot of time sitting in our parents’ kitchen tasting samples to piece together the flavor profile we wanted from different aged barrels and different mash bills,” he said.

Even more exciting is the Nelsons’ next product release, a Belle Meade Bourbon expression finished in Madeira casks, which are just a little bit larger than a traditional whiskey barrel at 225 liters, or 59 gallons. (Other wines, bourbons and ryes that I have sampled that have been finished in Madeira casks have exhibited lovely subtle fruit notes.) These casks are widely sought after, so it’s lucky that the Nelsons have secured a stock of oak for this upcoming line extension.

At Nelson’s Green Brier Distillery history influences everything. Charlie Nelson makes sure that the business stays true to their family legacy.

“Through our research, we have the names and old labels of many of the original products, plus some of the recipes as well,” Nelson said. “I’m most excited about recreating the old products, but today’s drinker is different from yesteryear’s. We want to release new products while staying true to the old styles. But the driving force is our mantra: Honor the tradition and history, but be willing to embrace change.”