While Five Trail is the first premium whiskey by Molson Coors, expanding into the category is said to have been an aspiration of David Coors for the past 20 years. “I’ve been wanting to make a whiskey for a very long time now … and now that dream is finally a reality,” said Coors, vice president of next generation beverages at Molson Coors, in a prepared statement.

When he was tasked to lead the company as it transitioned from beer to beverages in 2018, that’s when he came to bring the expression to life. In doing so, Coors sampled more than a hundred whiskeys before landing on a blend of Colorado single-malt whiskey and three bourbons, cut to 95 proof with Rocky Mountain water. 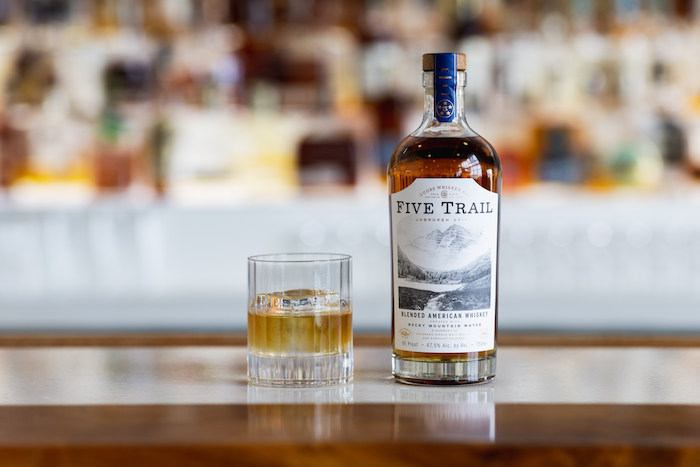 The expression is distilled, blended and bottled in partnership with Kentucky-based Bardstown Bourbon Company.

“As soon as we established the Next Generation Beverages Division in 2019, I knew one of our first products had to be a whiskey,” Coors explained. “Malted grain is essential to whiskey’s production and there were a number of distillers that were already using our malts in their expressions. Consumers are open to experimenting now more than ever, so it seemed like the perfect time to foray into the world of brown spirits. We’re extremely proud of the blend we created, marrying Colorado provenance with the craft and skill of some of Kentucky’s and Indiana’s most renowned distillers.”

The result of this partnership is a whiskey blend crafted by a team of five hands, helmed by a fifth generation member of the Coors legacy, both nods to the symbolic name of this new spirit.

The distiller’s official notes show Five Trail on the palate to have notes of sweet bourbon with hints of roasted nuts, honey, and caramel. The lingering notes of single malt marry with the spice of four grain bourbon and depth of wood and grain that come from the 13-year-old Kentucky straight bourbon.

“This whiskey will appeal to an array of drinkers, from novices to experts and connoisseurs alike,” said Peggy Noe Stevens, consulting master taster for Five Trail. “Each sip takes drinkers on a journey, starting off sweet with twists of creamy vanilla, honey-caramel and engaging flavors of custard and butterscotch. The flavor builds, ending with a spicy finish of ginger and cinnamon that lingers warm and dry. It’s robust and complex, making it versatile to enjoy over rocks and bold enough to hold its own in a cocktail.”

The whiskey has been released across four markets, Colorado, Georgia, Nevada, and New York for a suggested retail price of $59.99.