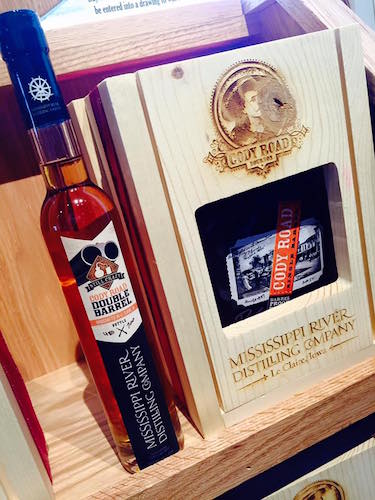 It’s been awhile since we looked in on Iowa craft whiskey maker Mississippi River Distilling Company. Turns out they’ve been hard at work on more interesting whiskey creations, as was evident in one of the most recent newsletters they sent out to their followers. From there we learned of three new expressions coming to market.

Perhaps the most interesting of the three is the Cody Road Single Barrel Bourbon, which is a derivative of their well received Cody Road Bourbon. What’s particularly unique about this offering is that it is a fifth anniversary bottling, making it the oldest bourbon ever released by the distillery. It was distilled back in 2012, with only 125 bottles being produced. Should you want a bottle of this, you’ll need to contact them directly for one, which prices at $75 each.

Another somewhat limited offering is a single barrel rye whiskey known cutely enough as The Whiskey In The Rye. It is available in Illinois only, and as for what went into this one, here is what the distillery had to say about it:

This is one of the most remarkable whiskies made in years. It’s a whiskey that desperately wanted to find itself, but went into a barrel when it was overwhelmed by the perplexing circumstances of its existence. Take the first sip and you won’t be able to stop until you have completed this wild and magic adventure. Or maybe we have this confused…

Finally, from their Still Crazy experimental whiskey series comes Cody Road Double Barrel. Available in Illinois and Iowa, this is basically another special version of their flagship bourbon which was first aged for two years in your typical new charred oak barrels. From there it was then finished in a winery’s ex-dessert wine barrels, giving it a “unique sweetness.” It was bottled at 101 proof, and only 500 bottles have been put out to market.

All in all, some great whiskey releases to finish off another year at a popular Midwest craft distillery.

173
Shares
203
Views
Share on FacebookShare on TwitterGet Our Newsletter
Cheers to the Dads! Personalize a bottle of his favorite whiskey to create a modern gift for the modern man. Use code: FATHERSDAY20 for $20 off your next order of $100 or more at ReserveBar