Mammoth Distilling, located in Michigan, has brought a new American whiskey to market the distillery team there feels turns your typical rye whiskey style on its head a bit. Whereas most ryes are aged first in new oak barrels, the Mammoth offering instead sees years of aging in used oak. 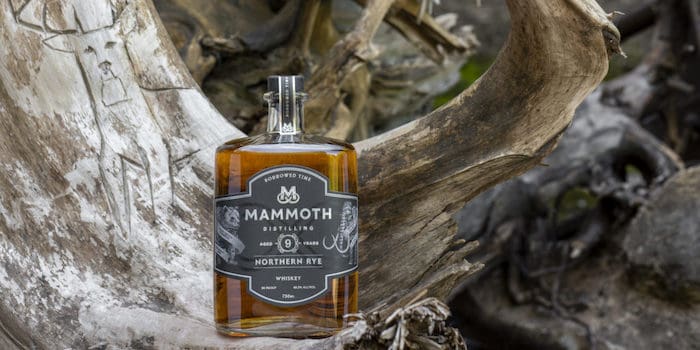 Also, in another interesting twist, this expression is distilled, like straight rye whiskey, from “rye grain (secale cereal) with small percentages of corn and barley. But rather than distilling from a mash, Northern Rye is produced by distilling each individual grain separately and precisely blending those finished fractions prior to barreling.”

“One of the biggest differences in Northern Rye is its maturation in an ambient-temperature rick house located in the unique 45th parallel microclimate,” said Chad Munger, President and Founder of Mammoth Distilling, in a prepared statement. “The character generated from variable wood contact in a highly volatile aging environment produces a unique grain-forward palate that emphasizes quality ingredients, patient maturation and skillful blending.

“This is a result that just can’t be reproduced using traditional American whiskey finishing techniques in a hotter climate.”

As it stands now plans call for Mammoth Northern Rye, bottled at 49.5% proof and aged a minimum of 9 years, to be released starting this month. Limited official tasting notes suggest “hints of vanilla and delicate fruitiness of pear and cherry are accented by sweet grass and ginger spice that deliver a medium-bodied mouthfeel, light caramel tannins and a clean finish.”

56
Shares
1.3k
Views
Share on FacebookShare on TwitterGet Our Newsletter
Read More Whiskey News
Whiskey Review: Jack Daniel’s Tennessee Taster’s Selection #6 Jamaican Allspice
Cheers to the Dads! Personalize a bottle of his favorite whiskey to create a modern gift for the modern man. Use code: FATHERSDAY20 for $20 off your next order of $100 or more at ReserveBar