In the early days of American whiskey lore, primarily before Prohibition, there were a myriad of whiskey brands and labels to be had across the land. Some have lasted the test of time to today, while many others have fallen to the wayside for various reasons. Often when we hear of a modern distillery resurrecting one of these, it is in Kentucky. Not so the case with this story though, as both the old name and the one bringing it back are out of Michigan. 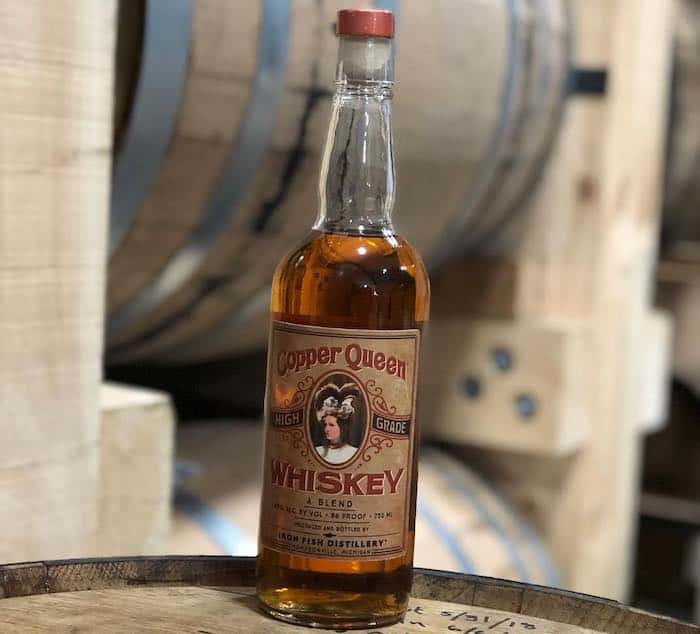 Iron Fish Distillery, said to be Michigan’s first farm based distillery, is a whiskey making operation we first learned about last year when we reviewed a couple of their expressions. For this latest offering, Copper Queen Whiskey, the story goes that

during the rise of the mining copper boom, young Narisco Bianchi emigrated from Italy to Calumet, Michigan in 1897 and opened a successful saloon after working as a teamster for the Calumet Brewing Company. It was around 1914 that he launched Copper Queen, a “high grade” blended whiskey that was likely sourced and relabeled by Bianchi. Soon miners throughout the Keweenaw Peninsula and in Red Jacket saloons were drinking Bianchi’s ‘Copper Queen’ Whiskey.

Red Jacket became Calumet where the whiskey of those times nearly faded away due to prohibition, if not for local business owners Jerry and Sandy Michelle locating an original bottle and advocating for the reintroduction of this once treasured spirit.

“Starting with the sweetness of corn, the earthiness of malted barley and the fruity spice of rye, we carefully sourced and relabeled this timeless elixir, as a commemorative whiskey celebrating the splendor and heritage of Michigan’s Copper Country,” said Richard Anderson, a partner at Iron Fish Distillery, in a prepared statement. “We reimagined the label to be a compelling postcard for the region and hope whiskey enthusiasts will eagerly add Copper Queen Whiskey to their collection, take a sip while planning their trip to the Copper Country!”

The commemorative bottling of Copper Queen, bottled at 43% ABV (86 proof) was recently released across Michigan. Proceeds from its sale will support Calumet Theater, a historic theater that’s been around since 1900.