Portland, Oregon, where we are headquartered, is also the home to the legendary McMenamins brewpub chain of drinking establishments. Part of this two state operation are distilleries which produce spirits, including whiskey, for sale and tasting throughout the different properties under this brand. Their Edgefield distillery in particular comes into focus for this author this time of year, courtesy of the annual St. Patrick’s Day release only of the Devils Bit Irish inspired whiskey.

I’ve written at some length before about the experience of visiting the Edgefield location to see Devils Bit whiskey being made first hand, so I’ll get right to what the 2016 offering brings to the table. The formula this time around is a bit unusual compared to previous years, in that the brown spirit, a four year old malt whiskey made from a McMenamins beer grain bill, was finished in beer barrels previously used to age a McMenamins black porter. 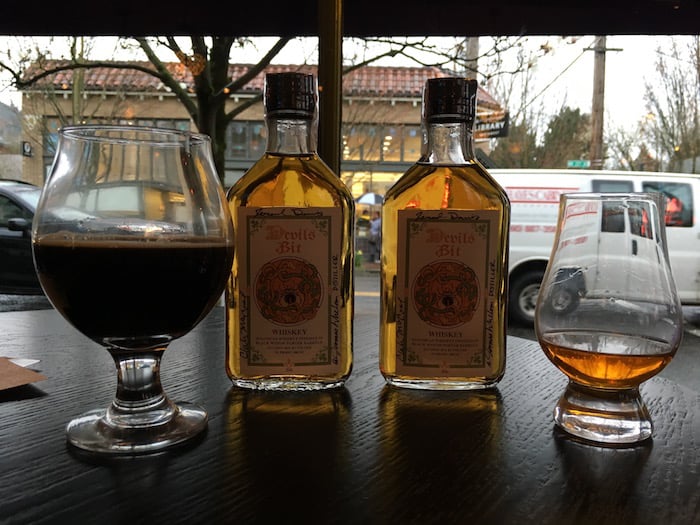 Here’s more specifics on this release, as described by McMenamins itself from a press fact sheet:

Taking advantage of the proximity to Edgefield’s Brewery, the 2016 release of Devils Bit is a McMenamins four-year-old Hogshead whiskey, with Hammerhead Ale grain bill, aged in new charred American white oak barrels. Coming full circle, the Distillery lent the Hogshead barrels to the Edgefield Brewery to age a 2015 batch of Black Widow Porter (McMenamins’ fall seasonal beer), and once the beer was ready, the Devils Bit was put back in the barrels to finish for six months. The end result is a limited edition whiskey available once a year with aromas and flavors imparted from the unique whiskey-to-beer-to-whiskey shared barrel aging process.

Now the only way to get hold of a bottle of Devils Bit is to be at one of McMenamins’ various locations where it will be on sale on St. Patrick’s Day this year. It will price at $17 for a 200 ml bottle, of which folks are limited to two per person. I normally make the pilgrimage out to Edgefield myself to buy my allotment – there are 1,600 bottles of it being released for 2016, but even with this volume it will likely sell out within a few hours after it appears on shelves

Tasting notes wise, the official ones are below from Edgefield. I got to try it alongside the Black Widow Porter at a recent press event and let’s just say its another winner in the long line of hits Devils Bit is each year.

The nose of the whiskey is intense with aromas of licorice, roasted malt, caramel, plum, vanilla and oak tannins. The palate is a perfect marriage of dark ale and malt whiskey, with flavors of dark chocolate, marshmallow, cereal and spice. This whiskey finishes long with a lingering sweetness on the mid palate.

205
Shares
194
Views
Share on FacebookShare on TwitterGet Our Newsletter
Get The Macallan® Rare Cask at ReserveBar. Shop now!