Nashville, Tennessee is a city on the rise. Over the past ten years, the relatively quiet hub of honky tonks and country music has been seeing rapid, continuous growth. As nearly 100 people a day from all over the country make their way there, the city’s skyline has become an abstract art piece of rural south and cranes stretching almost as far as the eye can see. However, just 30 miles south from downtown Nashville, removed from the endless hustle and bustle that seems to plague every metropolitan area now lies the sleepy town of Leiper’s Fork, home of a family owned craft distillery looking to continue a tradition of whiskey making that was found throughout the area before the state enacted prohibition in 1910.

Located just off of Route 46, and sitting in an open field surrounded by rolling green hills that’s a stone’s throw from the Harpeth River, lies Leiper’s Fork Distillery. As you make your way down the brown dirt road, you find yourself at the steps of a 200-year-old cabin that doubles as the gift shop. On the porch, you are greeted by Emily offering guests their choice of bourbon tea slushies and strawberry lemonade spiked with moonshine. All while a two-piece band sets up on the other end of the porch. Completing the historic feel is the 5,000 sq foot barn that houses the still behind the gift shop.

All of this is because of master distiller and proprietor Lee Kennedy. A Tennessee native (something that seems to be an oddity in this part of the state now), Kennedy wanted to recreate something from his past to share with others: quality small-batch whiskey. It is a point of cultural pride he says, stating that “growing up here, everyone knew who made the best moonshine and where to quietly get it,” It is almost poetic just as well that Kennedy should be the one trying to recreate the whiskeys that once coursed through Williamson Co. as it was his great-great-great uncle Sam Locke, a federal revenuer, that shut down over 70 illicit stills in the region before being gunned down during prohibition.

As part of that process, Leiper’s Fork Distillery uses locally grown corn and grains that are milled on site for their two mash bills. The first is a Tennessee whiskey containing 70% corn, 15% rye and 15% malted barley, and the second is a wheated bourbon containing 70% corn, 15% wheat and 15% malted barley. Both mash bills are cooked and fermented in 1,000-gallon vats made from 100-year-old Cypress wood. 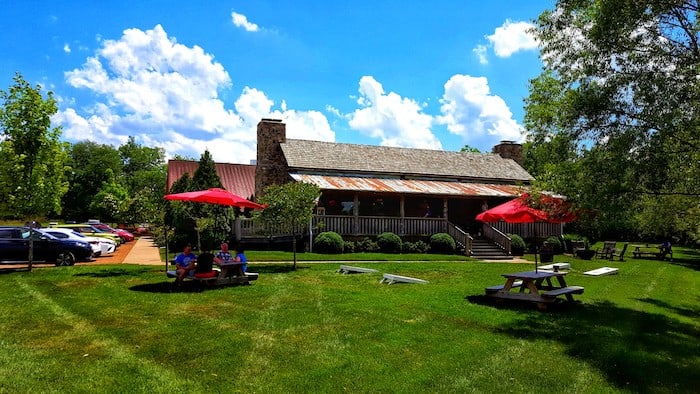 From there, the beer wash is sent to Ms. Ginger, a 500-gallon copper pot still crafted by Vendome Copper & Brass Works in Louisville, Kentucky. The still is crafted in a “Scottish” style and is outfitted with a swan neck Lyne arm connected to a four-plate column still. One point of interest that is important to note is that unlike other traditional Tennessee whiskey distillers, Leiper’s Fork Distillery always uses a sweet mash and opts to recycle cuts from previous runs for a more consistent flavor profile. The new make spirits are then transferred to 53-gallon, charred new American white oak barrels where it will rest for approximately the next 5-7 years.

Until then, Kennedy and the crew at Leiper’s wanted to offer something to help quench the thirst of the surrounding community. They didn’t want to follow suit as some other distillers offering vodka or gin. They wanted to maintain the culture of so many distillers before them in the area, and so set out to be the new guys where you can the best “moonshine” and maybe not be so quiet about it.

So, at the gift shop, you can purchase 375ml bottles of both of their house mash bill white dogs under the Old Natchez Trace label that is boastfully aged for “one minute” in used American oak and bottled at 45% ABV. If you want something with a bit more age on it, the distillery also offers a sourced 10-year-old Tennessee bourbon under the label of Colonel Hunter’s Select Barrel. This bottling is named in honor of the War of 1812 veteran who settled the land that distillery now sits on. However, this is a limited supply label and once it is gone, it is gone.

45
Shares
1.3k
Views
Share on FacebookShare on TwitterGet Our Newsletter
Cheers to the Dads! Personalize a bottle of his favorite whiskey to create a modern gift for the modern man. Use code: FATHERSDAY20 for $20 off your next order of $100 or more at ReserveBar