Of the many craft distilleries that have sprung up over the last few years, one you should be keeping a close eye on is Journeyman Distillery. Located in a scenic area of Three Oaks, Michigan, Journeyman started out as the post-golf-round thoughts of two men from different parts of the globe. Opening in the fall of 2011, the company has quickly grown, and is now outgrowing parts of the historic building that houses it. I got the chance to speak with one of the distillers at Journeymen about the history of the company, and what the near future might hold.

Part of what makes Journeyman an interesting place is founder Bill Welter’s backstory. After finishing college, Welter moved to Scotland for several years to play golf, where he met a Tasmanian entrepreneur with some knowledge of distilling. Sometime later, after the family business was sold, he thought back to that Tasmanian gentleman, and the idea of launching a distillery of his own began to grow. So he traveled – not back to Scotland, but to Tasmania – to study the art of distilling. Upon returning home again, he began the search for just the right building where he could begin his business, ultimately falling in love with a near-130-year-old building in southwest Michigan. The facility has quite the history to it, once being a factory for making turkey feathers corsets (all the rage in fashion at the time), and buggy whips.

The passion for what Journeyman does shows in the quality of spirits they produce as well as the way they distill each spirit. Beginning with only certified organic ingredients, the distillery mills everything on site so that the grains lose as little flavor between the mill and fermenter as possible. Then, the whole mash mix (grain and all) goes into the still. After collecting the best part of the run for barreling, the remaining spent grain is pumped to a holding tank to be shipped out to farmers for cattle and pig feed. The new spirit is currently placed in smaller 15 gallon casks to age until it’s ready for bottling. The smaller cask size and non-air conditioned warehouse helps the whiskey age more rapidly than larger, more conventional casks, meaning a batch only takes a year to a year and a half to age.

Journeyman, Welter told me, produces spirits which are all USDA certified organic. Given the extra time and money companies and farmers have to spend to achieve that certification, you know that grain is special. For anyone who is familiar with distilling, pesticides and most bacteria doesn’t generally survive the process. So, choosing to go organic with spirits is mostly an effort to improve the quality of grain and the health of the environment. 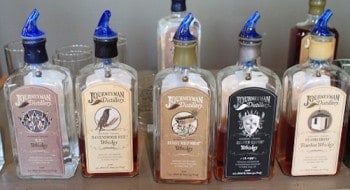 Some of the Journeyman whiskies. (image courtesy of Daniel Sampson/copyright The Whiskey Wash)

One question often asked to the distillery is what happens to used whiskey barrels after the bottling. Those barrels that aren’t kept for aging their Three Oaks single malt and rum primarily get sold to local breweries. I was told about a few of the partnerships that the distillers have established with a few local breweries, including helping formulate recipes for barrel-aged brews, and working on distilling beer into a hopped whiskey. I’m personally looking forward to the release of a milk stout whiskey that they are currently experimenting with.

Along with the currently six whiskeys they market, Journeyman also produces a unique gin, wheat-based vodka, rums, brandy, a jalapeño spirit, and a coffee liqueur. So, even if you’re not into whiskeys (or just want something new), the distillery gives you plenty to choose from.

397
Shares
453
Views
Share on FacebookShare on TwitterGet Our Newsletter
Get The Macallan® Rare Cask at ReserveBar. Shop now!