With President’s Day being this week, Michigan’s Journeyman Distillery has, right on schedule, released a new batch of their annual release, Not A King Rye Whiskey.

As the label for each bottle relays, Not A King is made in tribute to George Washington, the first U.S. president and apparently one of our country’s preeminent whiskey distributors at the start of the 19th century. Washington took up distilling after leaving the White House and retiring to Mount Vernon, Virginia. By 1799, he had the largest distillery in the country and produced 11,000 gallons of whiskey. Archeologists have since uncovered the original recipe for Washington’s rye: 65% rye mash, 35% corn, and 5% malted barley. 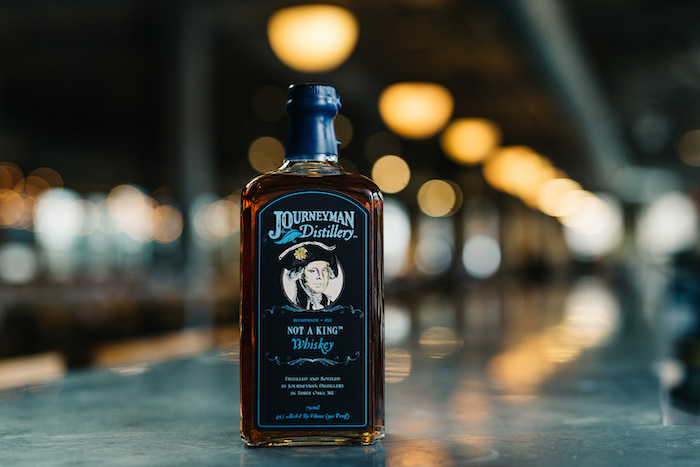 Journeyman’s Not A King Rye Whiskey (image via Journeyman)’

Journeyman’s Not A King Rye Whiskey is, according to the distillery, an interpretation of Washington’s recipe: 60% organic rye and 40% organic corn. The finished product, distilled and aged for three years in 30 gallon barrels at their Featherbone Factory in Three Oaks, Michigan, is a 45% ABV and 90 proof whiskey that has earned the distillery such honors as a gold medal at the 2018 Berlin International Spirits Competition and a five star rating from F. Paul Pacult’s Spirit Journal.

The name of this whiskey is also meant as a nod to the first U.S. president. As the legend goes, Washington was offered the title and crown of king for his service leading the troops in the Revolutionary War, but turned it down. It’s a great story but one that historians say has no basis in fact.

This limited release–the 6th batch of Not A King Rye–became available to purchase starting Friday, February 12 at Journeyman’s distillery in Three Oaks. The rest of the bottles will be on the shelves at select retailers on President’s Day, Monday, February 15. Official tasting notes are below.

A beautiful polished mahogany in color, it has nice notes of apricot up front on the nose. Upon first sip, cinnamon raisin toast comes through followed by freshly spun cotton candy. It finishes nicely with a hint of Nutella and dried stone fruit on the back of the palate.