Old time drinkers of Jim Beam rye whiskey will remember that this used to be an 80 proof expression that was popular as a cocktail base. The Yellow Label rye, as it was known as, was revamped and replaced back in early 2015 with their Pre-Prohibition rye, which clocked in at a slightly higher 90 proof. Now, via the appearance a new whiskey label that’s surfaced over at the TTB COLA public registry, we see what looks to be a return of the 80 proof, albeit it in a slightly different dress and under some very limited conditions.

Jim Beam Kentucky Straight Rye Whiskey, according to information on the label, is an 80 proof offering that’s made from a “time-honored Beam family recipe.” It is aged in your typical new, charred white oak barrels, and is said to be a “distinctively dry, spiced rye” that has “a bold flavor and a long, soft finish.” 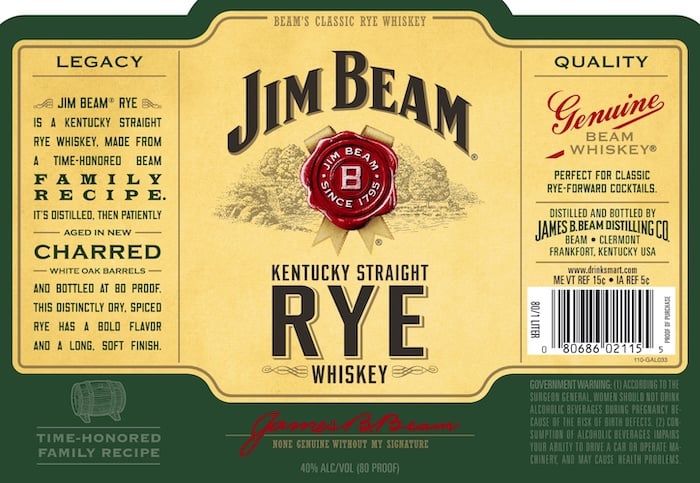 A Beam spokesperson confirmed with us that this return to the 80 proof was, in fact, a planned offering from the Kentucky distillery giant. What they are essentially doing is packaging the rye with what’s said to be a premium label inspired by the older yellow one that is being returned to, if you will, based upon interest by fans of this particular Beam expression.

It should also be noted this move will not see the end of the Pre-Prohibition offering – the 80 proof will be run alongside of it as a “limited time” offering that looks to be available only in Wisconsin as a reward to them for being a top, loyal market. As for when the 80 proof will hit store shelves, we are being told not until late summer. It will price for around $18 and, as was the case before, this is seen as being “perfect for classic rye-forward cocktails.”