In today’s world of American whiskey, a portion of the time tales told of sourced brands and their ties to bootleggers and the like can feel like overhyped marketing. There are brands out there, however, which have legitimate claims to a Prohibition past, and recently emerged Jacob’s Pardon looks to be one of those.

The new Jacob’s Pardon American whiskey line, according to those behind it, was founded by Marc and Jake Taub of Palm Bay International, a well known wine and spirits import business. The history of the Taub family in the liquor industry goes further back, however – these two represent, as they put it, “the third and fourth generations, respectively, of this family-owned enterprise, and Jacob’s Pardon is a nod to Marc’s great uncles’ tradition of whiskey production. 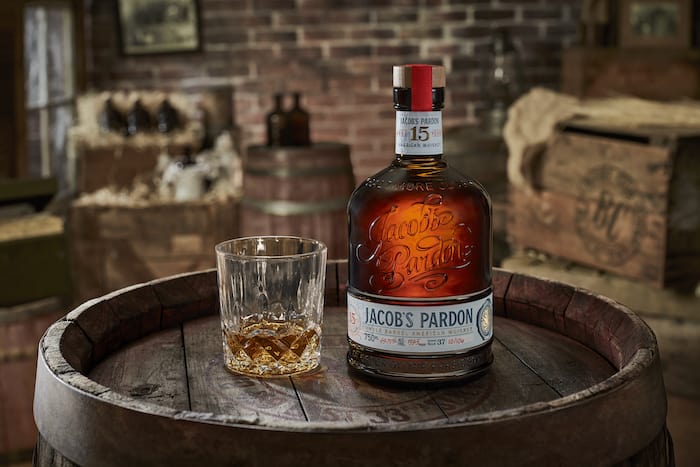 “Nearly a century ago, Jacob and Abner Taub crafted and bootlegged their own whiskey during Prohibition to support their family. Then one fateful winter night in 1929, their world came crashing down during a sting that would land the brothers behind bars. The authorities caught wind of their operation and raided their whiskey plant on February 11, 1929. The brothers were charged with violation of Section 88, Title 18 US Codes; transportation of whiskey barrels and making of whiskey. Their spirits production abruptly ended.

“Six long years later, President Franklin D. Roosevelt issued presidential pardons to the Taub brothers. They were able to reignite their family business together with their brother Martin (Marc’s grandfather) and help launch Baltimore Club Whiskey. This set into motion a family tradition that has spanned generations and serves as the inspiration behind the name Jacob’s Pardon.”

The Taubs, in looking to introduce the Jacob’s Pardon brand, turned to spirits authority F. Paul Pacult for help in putting together the releases. Serving as master blender on the project, he crafted from sourced whiskeys three limited production expressions that serve as the initial releases. They are as follows: