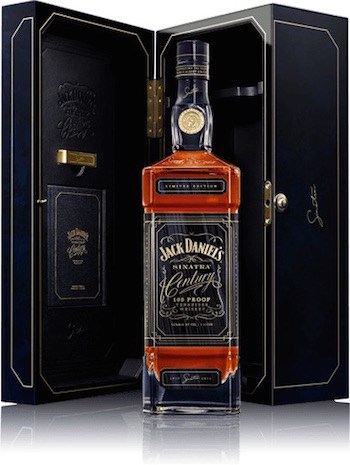 Legendary singer and all around bad ass Frank Sinatra, had he still been alive today, would be closing in on his 100th birthday this year. Jack Daniel’s, aiming to celebrate this special birthday and at the same time pay homage to one of its most famous drinkers, is set to release what has to be one of its most prestigious, and expensive, whiskies ever in the form of Sinatra Century.

The upcoming Jack Daniel’s Sinatra Century, according to those behind it, is an extremely limited release drawn from just 100 barrels “handpicked by master distiller Jeff Arnett.” It was bottled at 100 proof, and while it is available now through duty free stores globally, the word is out it will also see a more general retail release in the US in October. It is also not to be confused with the already available Sinatra Select.

So, how much would you expect to pay for this 1-liter bottling that’s certainly set to become a collector’s item? Try a whopping around $500 a bottle! That’s right, five hundred dollars for a whiskey which was aged in barrels with special interior grooves designed to reportedly “coax the whiskey to greater depths of white oak and give the whiskey a complexity of flavors – imparting Sinatra Century with a robust and refined taste.”

This special Tennessee whiskey is housed in a slick collector’s box and includes with it both a hardbound tribute book about Sinatra and the whiskey as well as “a replica of Frank’s tie clip that contains a digital, never-before-released complete concert recording of Frank at his best, onstage at The Sands Hotel and Casino in 1966.”

Tasting notes for Jack Daniel’s Sinatra Century are below courtesy of the distillery. As for picking up a bottle, you can watch for greater release of them through online sales channels here.

Aroma: Sinatra Century is oaky with a pleasant smokiness and sweetened with a subtle honey and caramelized tropical fruit character.

Finish: Ripe fruit with a pleasant smokiness and lingering notes of charred barrel spice round out our delicately crafted whiskey.