Jack Daniel’s No. 27 Gold Tennessee Whiskey has had an interesting, if somewhat short, history in the Jack Daniel’s whiskey universe to date. First introduced in 2015 as a travel retail exclusive, it initially spent time mainly in overseas markets, most specifically Asia. The expression has come home now, though, and is being officially rolled out to domestic liquor stores.

Jack Daniel’s No. 27 Gold Tennessee Whiskey, according to those behind it, is described as being “a double-barreled and double-mellowed expression” of the classic Jack Daniel’s Old No. 7 Tennessee Whiskey. More specifically, the process for creating this expression is said to first begin “with maturation in new charred American white oak barrels. Once these barrels are determined to be fully matured, they are removed from the barrelhouse and the whiskey is placed into maple wood barrels. The final step is a second time charcoal mellowing before being bottled.” 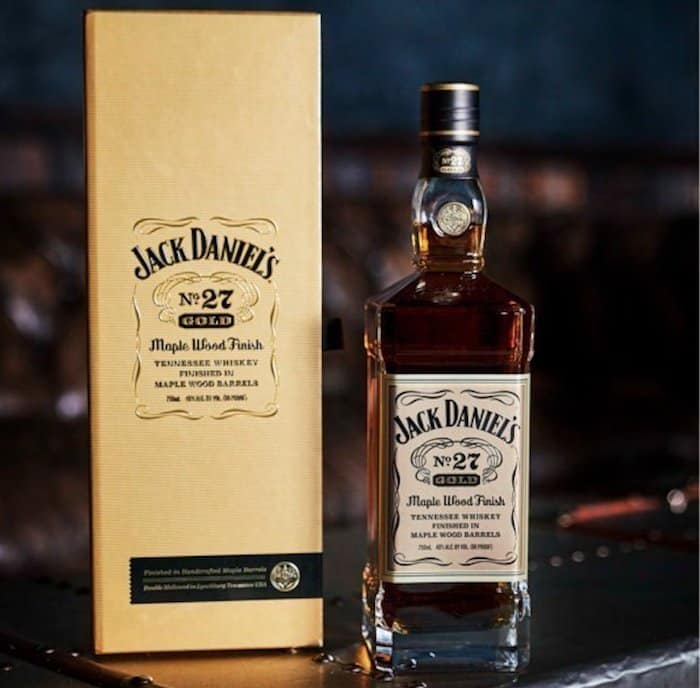 “Jack Daniel’s No. 27 Gold pays homage to our distillery’s golden rule of, ‘Every day we make it, we’ll make it the best we can,'” said Jack Daniel’s Master Distiller Jeff Arnett in a prepared statement.”The natural amber hue, along with a scent of toasted oak and honey, offer an intricate texture and taste, making this whiskey a very distinct and luxury product.”

This whiskey, said to be best enjoyed neat or on the rocks, is bottled at 40% ABV and prices around $100 per 750 ml bottle. Very limited official tasting notes suggest “a fusion between warm maple and toasted oak to create a rich and refined finish suited for today’s whiskey aficionado.” It should be noted as well that this expression’s reference to “27” in the name is tied to its twice barreled, twice mellowing process.