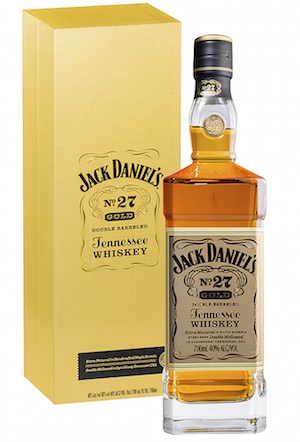 It is not an uncommon experience when American whiskey drinkers travel overseas and see bottlings of their favorite brands back home they’ve never encountered before while in the States. This includes fans of Jack Daniel’s, who will be jealous to know the United Kingdom is getting a new variant of this Tennessee whiskey that’s described as being “a rich, refined and distinctively finished expression” of the original Old No. 7.

Known as Jack Daniel’s No. 27 Gold Tennessee Whiskey, this release has slowly been trickling out around the globe, starting in travel retail markets. What you have here is a 40% ABV whiskey which has gone through double maturation, firstly in new charred white oak barrels then in maple barrels, before being mellowed twice through a sugar maple charcoal filtration process.

Limited tasting notes for this release from Jack Daniel’s indicate a spirit that has “a scent of toasted oak and honey and a taste of rich, warm maple and fruits.” It is presented in a bottle that pays homage to the iconic No 7, with its own distinct gold label and box. The number 27 tied to this release is said as well to be “a further reference to the bestseller, indicating that the new expression is based on the Old No.7 recipe, but double-barrelled and double-mellowed.”

“With only 500 cases produced,” said Nidal Ramini, head of brand advocacy at Jack Daniel’s parent company Brown-FormanJack, in a statement, “Daniel’s No 27 Gold really showcases the great skill and craftsmanship of the team at the distillery in Lynchburg, so we’re confident that existing whiskey drinkers and those trying a high-end American whiskey for the first time will be impressed by its quality and rich smooth taste.”