J. Rieger & Co. out of Kansas City, Missouri, recently announced the release of Rieger’s 2021 Monogram Whiskey. The bottling is a blend of straight rye whiskeys that were between 5 & 10 years old when they entered the Monogram Solera in 2015. For the past 6 years, the straight rye was exclusively finished in one cask, Bota #4, unlike the previous Monogram releases in which the cask only played a tiny part of the blend. The 500-liter sherry cask was once part of the Williams and Humbert Solera Especial, one of the oldest producers of sherry in Jerez, Spain.

As the brand explained it, traditional solera utilizes a system of fractional blending made famous in Jerez. The process of replenishing the casks, commonly referred to as Solera, adds complexity and character over time.

The 2021 Monogram Whiskey, according to official tasting notes, combines elements of rich deep fruit with the characteristic nuttiness of Oloroso Sherry and spices. With an opening aroma of Spring flowers, there is a fruity note of tamarind, papaya and cola that leads into charred honeycomb, ash and char, molasses, tar, toasted marshmallow and deep, dried, dark fruits like prune and raisin, before picy tobacco leads to decadent butter pecan ice cream and pumpernickel bread leads to chocolate-covered almonds. A finish of mint, eucalyptus, black tea, and clover honey completes the bottling. 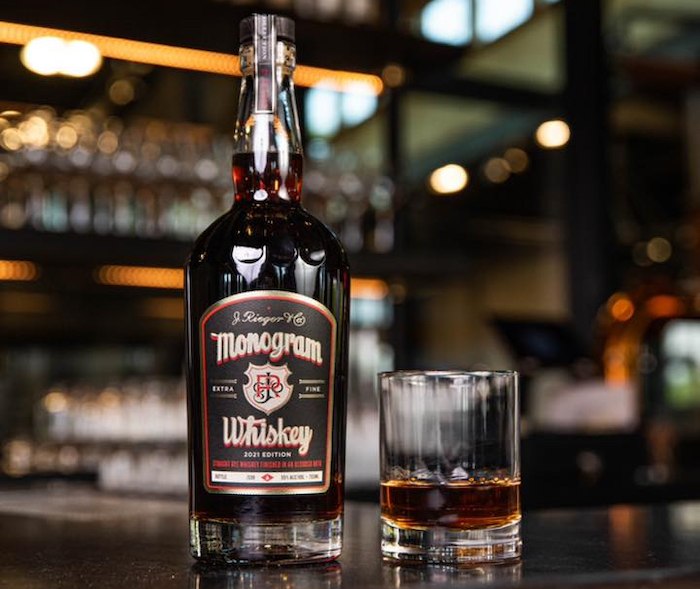 Since the Monogram Whiskey label was revived, all releases have been created in collaboration between the distillery team in Kansas City and sherry expert Steve Olson. Both the 2017 and 2018 editions of the Rieger’s Monogram were named in the top ten Global Best New Spirit in the Tales of the Cocktail Foundation Spirited Awards.

“The 2021 Monogram Whiskey release represents a turning point in the last 7 years of our journey to revive this beloved pre-Prohibition brand,” Co-Founder of J. Rieger & Co Ryan Maybee said in a prepared statement. “The Monogram bottling has always meant something special to J. Rieger & Co., but this release may be far and away the most special thing we have ever done.”

At 110 proof (55% ABV) and with only 539 bottles available, Rieger’s 2021 Monogram Whiskey is available for a retail price of $139.99 at liquor retailers and restaurants across the Kansas City metro area with a select amount available in New York and other markets.

249
Shares
696
Views
Share on FacebookShare on TwitterGet Our Newsletter
Get The Macallan® Rare Cask at ReserveBar. Shop now!