“The last product planned when we began production in 2014, Trifecta is perhaps the finest example of our ‘Spirits of Discovery,’” Bill Miller, founder of J. Carver Distillery, said in a prepared statement. “The emerging market for craft distilleries in America is single malt whiskey, which is based exclusively on malted barley and produced on-site by a single distillery.” 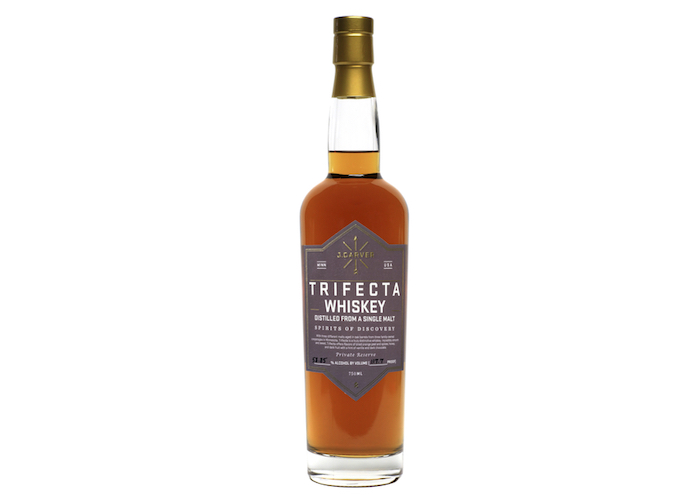 This release comes after the company’s introduction of a cask strength single malt, Etiquette Whiskey, which earned positive reviews and found success in the market.

The Trifecta was developed in collaboration with BSG, a subsidiary of Rahr Malting based in Shakopee, Minnesota. The blend was aged in used J. Carver bourbon, rye and barrel gin barrels and is non-chill filtered.  It was bottled at a cask strength of 117.7 proof and is limited to just 500 bottles for the release.

Coinciding with the introduction of Trifecta Whiskey, is the also coming to market of a new beer – Bad Weather Brewing’s Ominous Double Brown Ale, aged in J. Carver’s Trifecta barrels.

“We’ve been aging different beers in various J. Carver barrels for over 3 years now at Bad Weather Brewing Company. So when we got the opportunity to use a special barrel like Trifecta we couldn’t pass it up. The timing was perfect as our winter seasonal Ominous was already aging in the tank when these barrels became available. Ominous is a Double Brown Ale that has similar characteristics to Trifecta that meld really well together,” stated Andy Ruhland Head Brewer with Bad Weather Brewing.

Official tasting notes for the whiskey are as follows.