J. Carver Distillery last month announced the limited release of its first whiskey distilled from a single strain of malted barley: Etiquette Whiskey. It is aged for more than four years in new and used charred oak barrels.

“The overwhelming majority of whiskey produced and consumed in America is based on non-malted grains such as corn, rye and wheat,” stated Bill Miller, a Founder of J. Carver Distillery, in a prepared statement. “Bourbon dominates the market, although the rye whiskey category is growing very rapidly and wheat whiskies are just starting to catch fire. The emerging market for craft distilleries in America is single malt whiskey, which is based exclusively on malted barley and produced on-site by a single distillery. 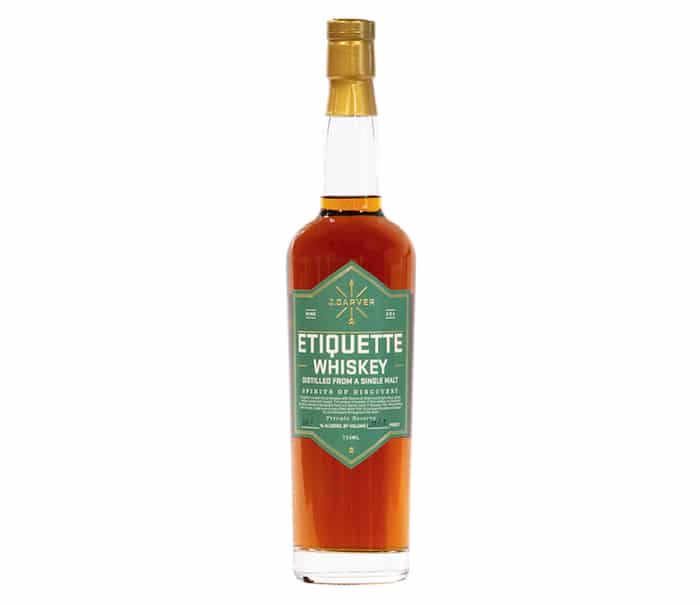 “This single malt whiskey was developed in collaboration with our friends at BSG, a subsidiary of Rahr Malting based in Shakopee, Minnesota. It is based on a single strain of malted barley, was aged in new and used J. Carver Bourbon barrels, has not been chill-filtered, and has been bottled at cask strength. The combination of these factors assures that this single malt whiskey maximizes the richness and complexity of the malted barley and J. Carver Bourbon barrels, and the uniqueness of our distillation techniques.”

“We are very excited to be entering the single malt whiskey category,” added Gina Holman, Founder and managing partner of J. Carver Distillery. “Many of our customers have been asking us when we will introduce this product.”

Etiquette Whiskey is a limited release of under 500 bottles and can be found at retail in Minnesota. Official tasting notes are below.