Iron Chef Masaharu Morimoto Gets His Own Single Malt Whiskey

Masaharu Morimoto is a name that’s pretty well known among fans of celebrity chefs as the star of Iron Chef and Iron Chef America, having competed particularly on the former since 1998. Morimoto has also built himself a considerable foodie empire, including 15 restaurants around the world and a few beers done in collaboration with Oregon-based Rogue Ales & Spirits. One can now add whiskey to this list, courtesy of Rogue and the beers it produces for him.

The new, limited edition Morimoto Single Malt Whiskey, according to those behind it, “started at the Rogue brewery in Newport, Oregon in 2016 as Morimoto Imperial Pilsner and Morimoto Black Obi Ale. After fermentation, the wash was transferred from the Rogue brewery to the distillery to be distilled and barreled in American Oak barrels. The barrels rested in Rogue’s Ocean Aging Room where they absorbed the Pacific Ocean air for over two years before being transferred for finishing in Oregon Oak. 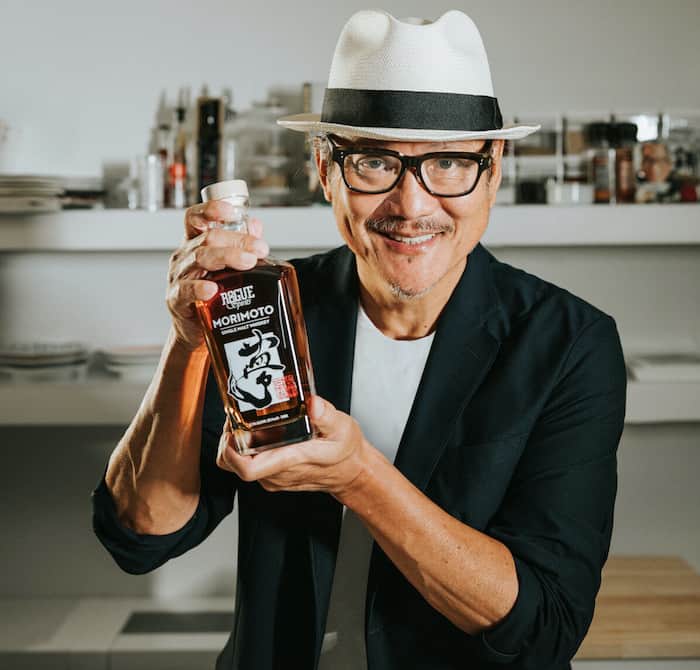 “The Oregon Oak barrels were built by hand at Rogue’s cooperage, Rolling Thunder Barrel Works, and previously aged Rogue’s … Rolling Thunder Imperial Stout. A year and a half later, the barrels” were then blended to create this special American single malt whiskey.

“My relationship with Rogue Ales & Spirits goes back nearly two decades and is the longest partnership of my career,” said Chef Morimoto in a prepared statement. “The Morimoto-branded beers have been guest favorites in my restaurants around the world, and I’m very excited to introduce this very special single malt whiskey to them this year.”

“It has been an honor to work with Chef Morimoto for nearly 20 years to make unique and interesting beers and spirits,” added Dharma Tamm, Rogue President. “This new single malt whiskey is no exception – the combination of Morimoto Signature Imperial Pilsner and Black Obi, Rolling Thunder barrels and distiller selected proof make this something truly special.

“It has been a labor of love that we’ve spent years making.”

This whiskey is bottled at 85 proof and will be made available at Morimoto restaurants, Rogue pubs and retailers around the country. The bottle it comes in features a label that was designed by Chef Morimoto himself. Official limited tasting notes suggest “spicy aromas on the nose with subtle smoke and hints of coffee, chocolate, cocoa and dried fruit. On the palate, the prominent soba nut flavor melds with the distinct dark cocoa, toffee, coffee and vanilla provided from the Imperial Stout and subtle smoke from the Rolling Thunder barrels.”