Foundry Distilling Company, based in West Des Moines, Iowa, was started by one Scott Bush, a co-founder of well known American whiskey brand Templeton Rye. He sold his interest in it in 2016, and now focuses upon Foundry. One of the programs going on there is their Brewer/Distiller Alliance. The first whiskey from this program has now been unveiled, the result of a partnership with Boulevard Brewing Company, considered the largest specialty brewer in the Midwest.

The new Midnight Ritual, according to those behind it, is an American malt whiskey. It is created from Boulevard’s Unfiltered Wheat beer. It is said that, prior to fermentation, this brew “traveled by tanker from Boulevard’s Kansas City brewery to historic Valley Junction in West Des Moines, Iowa, home of Foundry Distilling Company. 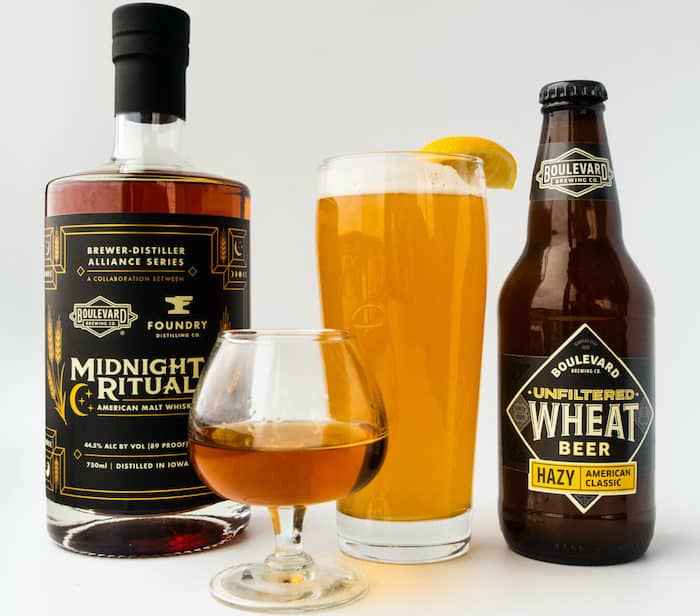 “After distillation in Foundry’s towering column still and a slumber of more than two years in new 30-gallon #3 charred oak barrels.”

“We’re pleased to find this new and imaginative way for our most popular beer to be enjoyed,” said Boulevard brewmaster, Steven Pauwels, in a prepared statement. “Midnight Ritual’s spicy sweetness and smoky barrel character make it perfect to sip alongside an Unfiltered Wheat.

“We’re having a blast with our friends at Foundry, and look forward to tasting new whiskeys made from other Boulevard beers.”

“We think this is an amazing spirit, and can’t wait for more folks to try it,” added Bush. “We are collaborating with some of the best breweries in the country to create a collection of the most unique and interesting whiskeys in the world.”

14
Shares
2k
Views
Share on FacebookShare on TwitterGet Our Newsletter
Cheers to the Dads! Personalize a bottle of his favorite whiskey to create a modern gift for the modern man. Use code: FATHERSDAY20 for $20 off your next order of $100 or more at ReserveBar