Interview: What One Distillery Did To Gain A New Whiskey Still With A Grand History

Adam Stumpf’s family farm has been in operation for eight generations. When he was told he couldn’t grow barley in southern Illinois, nor rye, that wasn’t a barrier, merely a challenge. “The way we do things, we quite literally have to farm first,” says Stumpf. “We’ve taken incredible care in seed selection. It took us about four or five years finding varieties of seed that perform well, both in the field and in the distillery, but we’re very happy with where we’re at now.”

Four or five years is but a blink for generations of farmers.

Every kernel of grain that gets turned into spirits on the site is harvested from the farm, followed by onsite milling, mashing and fermenting. Stumpy’s also pulls all of their limestone-filtered water from wells on the property. Their system is a tight grain-to-glass operation, but the need to expand their capacity and production took Stumpf far from the farm in search of the right distilling equipment.

That quest took him online, to Belgium, where he negotiated the purchase of a variety of still components from an old genever distillation operation. “Old” fits in well with Stumpy’s sense of generations of business: the still materials are 100 years old. This wasn’t a FedEx delivery: the parts came over in two 40-foot shipping containers. Stumpy’s shut down their distilling operation, cut a ton of concrete out to install trench drains, and began the complicated process of putting a large amount of distilling equipment back together in new configurations.

Here’s a Q&A on just how complicated the process has been for Stumpy’s Spirits: 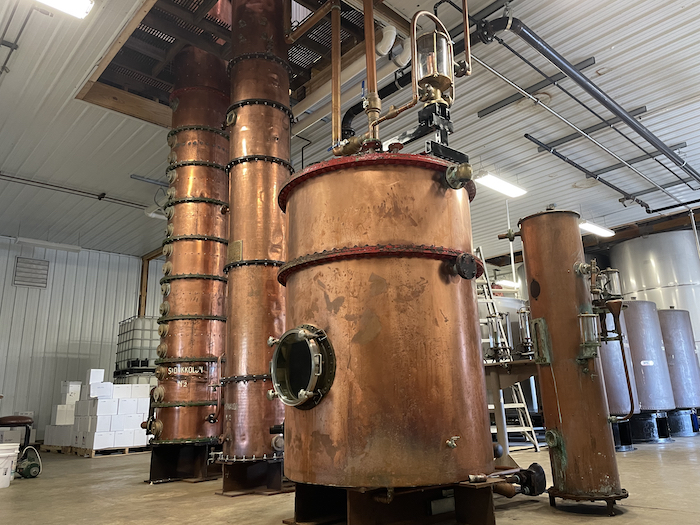 Whiskey Wash: Had you considered buying a new still, or were you always looking for something used?

Adam Stumpf: We had considered a new still, but quickly realized the big-name manufacturers were going to be too expensive for our budget. We then looked at doing a custom-build 24” column from a machine shop based off of our modified continuous column design that we were running on our 12” column. As we were going down that path we stumbled across this equipment: I was actually lying awake at 3am searching the internet when I came across the listing for this equipment—although the page was in Dutch!

WW: Did you have volume/style/material/ specs in mind when you were looking, i.e., would a basic column still of the right size have worked for you or did you want pot stills, or what?

AS: We did have some basic volume considerations in mind, since we had outgrown our 12” column. We also know that we needed to make everything in our existing portfolio with grain-on distillation, from bourbon and rye whiskey to vodka and gin. We were honestly thinking we were going to be going with a 24” column with a doubler and a 500-gallon pot still to finish the vodka and gin, before we came across this lot of equipment.

WW: When you found the Belgian stills on the net, were they fully disassembled? Were you able to size them up well enough to know they would work?

AS: Yes, the company selling the equipment had basic dimensions. The capacity a column can put out is all about its cross-sectional area, not its height. They were able to give me the internal dimensions of the column and from there we were able to calculate the still’s capacity. We ended up purchasing a total of 5 columns, a pot still, which is now our doubler, a ton of condensers, a bunch of tanks, sight glasses, spirits safes, tail boxes, etc. Each of the columns was broken into either 2 or 3 sections when we first saw it.

WW: Do you know the still’s origin—were the Belgians that owned it distillers or scrap metal people?

AS: Everything came out of a grain genever distillery in Kortrijk, Belgium, which is just outside Antwerp. The equipment was originally built in 1922 and came from a few different places. The family that originally owned the distillery operated it from 1922 until the mid-2000s and largely produced a brand named St.-Pol. There is even a story that all of this equipment was hidden during WWII to keep the Germans from turning the copper into artillery shell casings. Then the equipment was used in an expanded distillery in late 1945 after the occupation had ended.

We are completely reconfiguring the setup, as grain genever production is quite a bit different than how we distill in the United States.

The 28” copper beer column was custom-built in place at the distillery. The 850-gallon doubler was built in Brussels. The column that was originally on the doubler when it was in Belgium was custom-built on site. The other two columns were built in Clermont-Ferrand in the Cognac region of France. These two columns are of the original Barbet design and are very similar to the old stills running rum in the Caribbean. We are integrating them into our vodka process.

There is an “extra” 28” column we are actively marketing for sale as well.

WW: How much follow-up and negotiating did you do with the Belgian folks before you sealed the deal?

AS: There was a lot of follow-up and a bit of negotiating, but not a ton. Most of the negotiation was with freight companies and trying to find the most reasonable way to get two 40’ containers packed full of our business’s future here! There was a lot of follow-up with the equipment company and it drug on for quite a while. There was a slight language barrier but not horrible. Being on the other side of the world, we were generally limited to one email exchange per day. When we were getting close to the end of the deal, I basically stalked my computer and email at all hours of the night.

WW: Were you confident enough in your mechanical abilities to deal with re-assembling everything and making it suitable for Stumpy’s?

AS: For the most part, yes. Although if I didn’t say there were times I thought, ‘Are we getting in over our heads?’ I would be lying. My past life includes growing up on a farm, being educated as an engineer, and working at Anheuser-Busch InBev. That experience, coupled with the fact that this was going to be our fifth equipment install and second design/redesign, I was confident with our team’s ability to get this project across the finish line

WW: What challenges have you faced in getting it running?

AS: Oh, my goodness—I could probably write an essay on this! The biggest challenge was getting over the fact that we were staking our company’s future on a bunch of equipment that is almost 100 years old and buying it sight unseen. Once the equipment arrived and we started getting it disassembled and cleaned up, we quickly got over that, as we knew we had a diamond in the rough. Functionally, the biggest challenges have been dealing with equipment that was manufactured 100 years ago with custom and metric components. We can just go to the hardware store to buy adapters and flanges, so every single connection has a custom-manufactured adapter that we have made in house.

From a business standpoint, it has been a challenge because we have had to shut our distilling operation down for so long. We made a massive stockpile of alcohol Q4 2020 and Q1 of 2021 to get us through the install. We shut down right at the end of February and should be up and running in late August. That’s a long time to operate as a distillery without making alcohol! However, we knew it was going to take a long time and we wanted to get the expansion done over the warmer months of spring and summer, especially since we had to cut a hole in our building’s roof to add a still tower. The reason we knew it was going to take longer was because we decided to do 100% of the install ourselves.

To date, we have not brought in a single contractor. Our team, together, has done all of the construction, cleaning, reassembly, repair, fabrication, welding, electrical, automation, —everything! The people that make whiskey at our distillery used their hands, and their hands only, to build the tools to do it. As such, our team has an incredibly deep understanding of how this distillery ticks.

WW: What will your volume and output be?

It’s Not Just About the Stills

While the folks at Stumpy’s wrestle with 100-year-old stills, their operation has up-and-running pieces that fill out a distillery’s evolving puzzle. Their single-barrel program for retailers is thriving, as well as their distillery-consultation service division. “We do everything from just supplementing existing distilleries’ production needs, to basically soup to nuts for non-distilling producers,” says Stumpf. “And single barrels are becoming an even bigger portion of the business as our inventory continues to age. We make sure to hold back some of those really unique mash bills and profiles specifically for that single barrel program.”

On the spirits shelf to come, they have a bottled-in-bond wheat whiskey coming out and a new rye later. “We’ve got various entry proofs all the way from 93 proof up to 120 proof in this range of barrels that we’re looking at, in this 100% wheat,” Stumpf says. “This fall we’re going to combine those and our barrel proof after the entire dump, and we’re targeting right around 100 proof. So we’ll basically have a 100% wheat barrel proof bottled-in-bond.”

They’ll also be releasing a rye in 2022 that’s from a 1911 recipe, and their house bourbon recipe is from 1937. “Everything was getting ramped back up after post-Prohibition, making that style of whiskey,” he says. “We took a historical look at rye recipes, and now that we’ve got this historical equipment, it’s really cool  that we will be running those historical recipes on that old equipment.”

The Stumpfs have made history (and whiskey) on their family farm for a while now, and it looks like the best of the past will always be a part of their bright distilling present.