Rob Dietrich, the man at the helm of Metallica’s Blackened American Whiskey, has become “One” with the spirits and now has a “Masters of Whiskey Series” on the market.

At the beginning of this story, the Blackened whiskey brand was born from a heavy metal collaboration between legendary Master Distiller Dave Pickerell and Metallica.

People had been playing music to spirits for ages – think of a violinist playing in a vineyard. But Pickerell was ahead of his time, one of a handful of distillers that pushed the envelope in the American whiskey category. 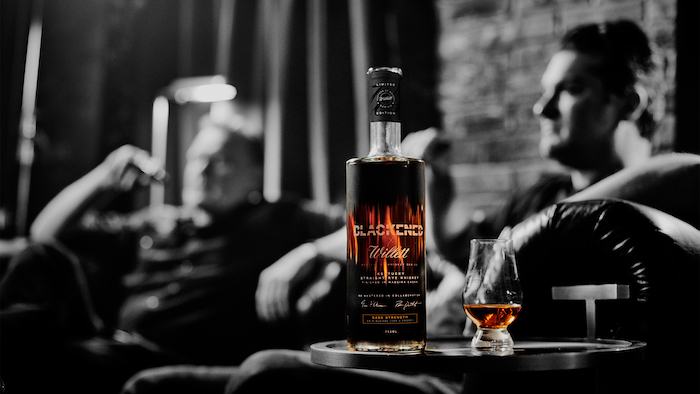 Dietrich said he was fortunate to be able to pick up the mantle at Blackened after Pickerell, “and be a part of that stewardship he started.”

Just like in a legendary heavy metal band, it’s about the collaboration. And it’s this core tenet of collaboration that’s behind the “Masters of Whiskey Series” – a convergence of passionate master craftsmen who combine their talent and skills to create a distinctive expression.

This series will combine the blending and distilling strengths of Dietrich and renowned whiskey makers to re-imagine craft whiskey and create more complex expressions.

Blackened American Whiskey is already a complex expression in and of itself. It will be more so as the new release “Blackened x Willett Kentucky Straight Rye Whiskey Finished in Madeira Casks” hits the market. What makes it complex? The proprietary “Black Noise” sonic-enhancement process.

In layman’s terms, they blast Metallica at the casks full of aging whiskey, and the low frequency waves perform their magic in the barrels.

Dietrich said for this new expression, they start with Willett Kentucky Straight Rye Whiskey Finished in Madeira Casks, a base of low rye and high rye whiskey recipes that were hand-picked by Dietrich and Willett Distillery’s Master Distiller Drew Kulsveen.

This whiskey came from the coveted Willett Family Estate Reserve Selection. Aged for an average of six years in white American oak casks, the whiskey features hints of  brown sugar, corn husk, cigar box, and vanilla. The taste has notes of buttery caramel, earthy mint, and fresh-cut hay, and it finishes with vanilla, cinnamon butter, and dark walnut.

Dietrich said that after the rye whiskeys are married together, they’re finished in Madeira casks for up to several months.

Madeira is a fortified wine made on the Portuguese Madeira islands and receives its unique taste from repeatedly heating the wine. The casks impart dark fruit notes, overtones of honey, and slightly sweeter flavors of caramel and cinnamon that pair with the spicier notes of the rye.

Blackened bottles this elixir at cask strength. It is then, during finishing, that the whiskey undergoes the proprietary “Black Noise” sonic enhancement process in which the finishing barrels are pummeled by the low hertz frequencies of Metallica’s music.

The sound waves visibly shake the finishing barrels, causing a greater interaction between the whiskey and the wood, thereby extracting more flavors and colors.

Here’s the cool thing. Way back in 1996, Dietrich had wrapped up three tours of duty in the Middle East and was finished with his military service. He was in California with friends, and his rock climbing equipment. He was asked if he could climb and rig some equipment at an outdoor concert in San Jose.

That concert was Lollapalooza and the headlining act? Metallica.

“Yeah, I got to be stagehand for Metallica. Pretty cool,” Dietrich said. “Years later, my final interview for Blackened (Whiskey distiller) was in front of the whole band. I had to stop down and tell them about being the stagehand back in ‘96.” 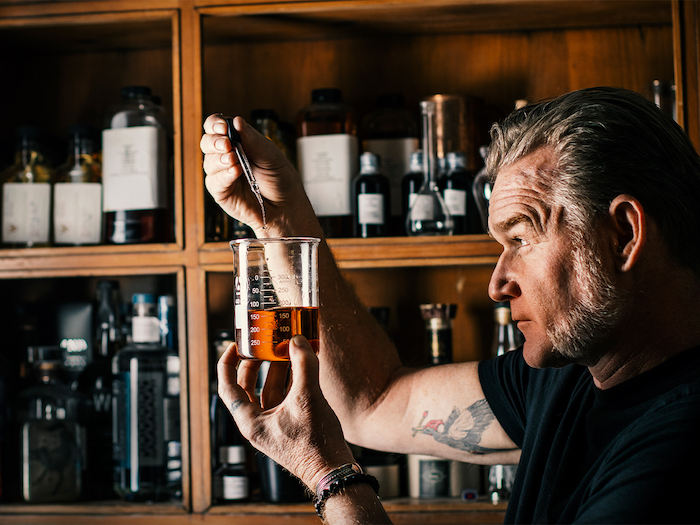 He said he always found the bandmates of Metallica to be innovative. “Their approach to their craft as artists first and foremost, I can respect that. I feel that now, whiskey can be art. They are always allowing the freedom to express and to be innovative.”

Even down to which songs play to the whiskey, Dietrich said there is attention to detail and artisanship.

Dietrich said he’s a big fan of rye whiskey. He started out in the business working with single malts at Stranahan’s in Colorado, and his fascination with whiskey grew from there. “The history with rye, how it was hardy and stuck around when other grains failed. I can respect that. And I knew that if we were going to go with rye, my first choice hands down was to start a relationship with Willet.”

While the “Masters of Whiskey Series” is part of Blackened’s future, the collaboration between Dietrich and Kulsveen is also an homage to the past. Both brands were highly influenced by late Master Distiller Dave Pickerell.

Known as the “Johnny Appleseed” of craft distilling, Pickerell used his expertise to help dozens of entrepreneurs start or restart small craft distilleries, one of which was Willett Distillery.

He had been a longtime friend of the Kulsveen family and bonded with them over a shared passion of whiskey making. In 2011, when the Kulsveens were looking to bring the Willett Distillery back online, Dave lent his insights and helped with logistics to get the distillery up and running.

And when Blackened was looking for a location to shoot its brand video, the Kulsveens lent their distillery. It was then that Dave introduced the Blackened team to the Kulsveens, setting the foundation for this recent collaboration.

Metallica met the Kulsveens and the distillery team when the band was in Louisville for its WorldWired tour. The band received a first-hand look at Willett’s production, christened the distillery’s new restaurant with a meal, and bonded with the Kulsveens over fine cigars.

Metallica’s Lars Ulrich said the original idea with Blackened was to create something new and unique that connected with both their fans and whiskey enthusiasts. Importantly, the band wanted something that stood on its own and was respected.

A wall of sound, with the basis of it coming from the sound system the band uses on tour, is what gives the sonic aging process the gusto. Dietrich said the whiskey aging process uses the heat of the day to draw the spirit into the wood, and the cool of the night to release it. The sonic aging does this same thing, yet at a very rapid pace.

But don’t expect to walk into the rickhouse to find Metallica blasting on speakers. The sonic enhancement happens at a very low frequency. “Imagine walking in front of the subwoofers at a concert. That feeling you get. That’s it,” Dietrich explained.

Blackened’s evolution was to push the possibilities of the marriage of music and whiskey even further.

“When we visited Willett Distillery in 2019 and saw the passion and craftsmanship that goes into every drop they produce, we knew we had found kindred spirits,” Ulrich said. “Teaming up with the Kulsveen family to kick off the Master Series with Willett was the natural next step in Blackened’s evolution.”

Willet’s Drew Kulsveen said he’s had a blast collaborating with Rob on this project. “We realized early on that we both shared a vision for the flavor we hoped to achieve in the blend and we are eager to share what we have come up with.”

Blackened x Willett Kentucky Straight Rye Whiskey Finished in Madeira Casks is available in limited quantities for a suggested retail price of $139.99. Dietrich said it’s only the first in the brand’s “Masters of Whiskey Series,” which will feature new collaborations and unique expressions for years to come.